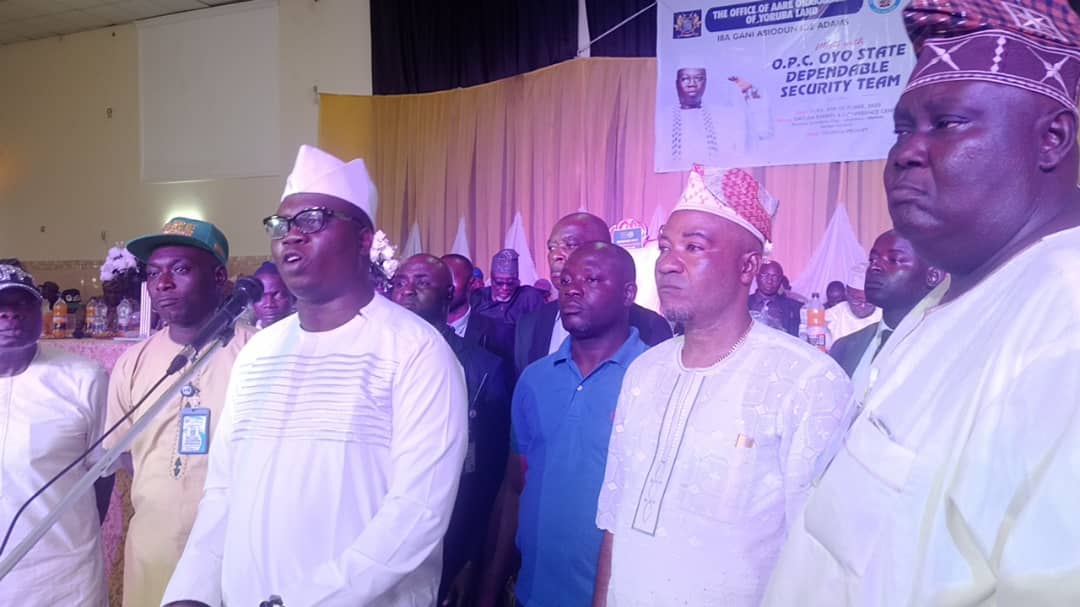 Aareonakakanfo of Yoruba land, on Tuesday said the Oodua People’s Congress (OPC) is ready to secure the South-West region with all its might and strengths

Iba Adams made this known in Ibadan, Oyo state, while unveiling the Oyo state chapter of the OPC dependable security team in the state.

The event, held at Dayland Events Centre, Barracks,Ijokodo, Ibadan, had in attendance, over 20,000 members of the group in the state.

Giving reasons for the composition of the security team, Adams stated that the bad security situation in the country necessitated the new security arrangement that was purposely  orchestrated to combat insecurity in the region.

The Yoruba generalissimo said the new security arrangements started in Lagos and Ogun, adding that the Oyo state chapter is holding on Tuesday while Osun will hold on Thursday with other South-west state holding at a later date.

“The OPC Dependable Security Team is a child of necessity that was borne out of our desire to secure the South-West region against intruders.

“The OPC Dependable security team is a combination of about 200 members from each of the 68 local governments and LCDAs in Oyo state and it is just to show the strength of our dependable forces in the state.

“We are using this to send strong message to the terrorists masquerading as kidnappers and killers  across the  South-West region. We will resist any attempt to turn Yorubaland into hub of terrorism. The South-West is no longer a home for terrorists.”

Aare Adams said the recent exploits of the Dependable security team was in Ikorodu when the team intercepted two buses loaded with large quantities of live cartridges heading to the North and were handed over to the police for proper investigation.

“We are beginning to see the results with the Ikorodu experience. However, it is my belief that the new security arrangements will usher in a moment of peace in the South-West.

“OPC will not relent in its efforts to rid the region of terrorists and their allies.”

Meanwhile, Coordinator of the OPC in Oyo, Comrade Rotimi Olumo said the meeting is not political but an intervention strategy aimed at securing the state against terrorism.

He applauded the efforts of the Aareonakakanfo for the noble idea aimed at bolstering the grassroots security network in the region.

“The entire state will benefit from the new security arrangements because it is basically for security and nothing more. So, I am using this opportunity to implore all our members to be security conscious in their day to day activities”, the Oyo state OPC chieftain said.