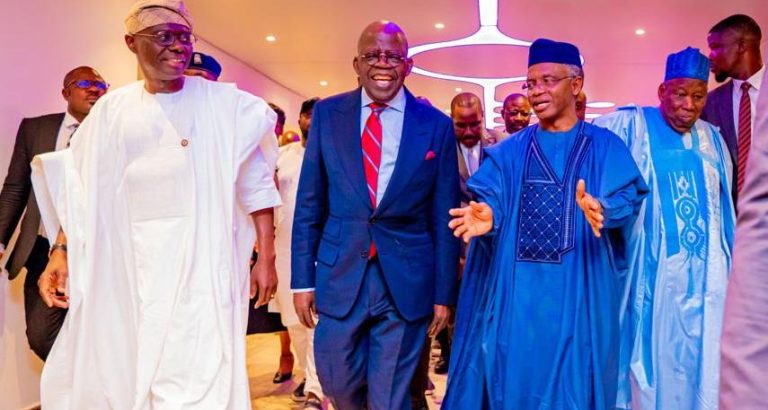 He spoke during a session with industrialists, business executives, entrepreneurs and foreign investors by Tinubu.

The interaction on Tuesday on Lagos Island was an avenue for the APC candidate to share details of his economic blueprint with the organised private sector.

Sanwo-Olu said that Tinubu’s meeting with the organised private sector players demonstrated the APC candidate’s commitment and seriousness to drive the desired change expected in the national economy.

The governor said that Tinubu was not a stranger to the needs, concerns and interests of the private sector.

According to him, the former two-term Lagos State Governor, as a visionary political economist, understands the pulse of investors and possesses the magic wand to turn around contemporary challenges facing the business community.

He said that the APC candidate would change the business community’s concerns to positive results.

Sanwo-Olu said: “Asiwaju Tinubu is a man that has been able to combine political acumen with the understanding of the economy and economics of every jurisdiction.

”As Governor of Lagos, Tinubu pioneered several firsts, which still stand till today.

“During Asiwaju’s tenure, he initiated the idea of the Economic Summit as a catalyst for economic development.

“He started in Lagos with the Ehingbeti Summit in 2001.

“That summit has continued to lead the successive administrations after him into various applaudable economic agendas.

“Under the Tinubu leadership, Lagos became the first sub-national entity to bring about the Independent Power Project and first state to initiate the idea of establishing a seaport.

“Yesterday (Monday), that vision came to fruition as we witnessed the completion of Lekki Deep Seaport.

“This speaks to the sheer doggedness and audacity of this man of vision.

“Eko Atlantic City is today the biggest real estate developed in this part of Africa through reclamation of the ocean.

“All thanks to the vision of Asiwaju to turn problems to opportunities.”

Sanwo-Olu said the immersion of private sector professionals in public governance was an idea fiercely pursued by Tinubu during his tenure as Lagos State Governor.

The governor said that the APC candidate created a first-rated private sector-driven cabinet that remained the envy of every government in the current republic.

Sanwo-Olu said Tinubu would bring his private sector dexterity and acumen to bear in administering the country, as the APC presidential standard bearer understood the pains and concerns of those in the business sector.

He added: “Today, Tinubu is here as a politician and leader of our party.

“On the other side, you all see a man that is compassionate, intelligent, business-driven and has acumen to solve the challenges the private sector experiences on a daily basis.

“I present to you the man that has what it takes to lead this country forward to the prosperous future with renewed hope.”

The Director General of Tinubu-Shettima Presidential Campaign Council, Simon Lalong, noted that marketing Tinubu to the business community would not be a difficult task.

Lalong, who is the Governor of Plateau State, said this was so given the antecedent of the candidate in turning hopeless people to business owners.