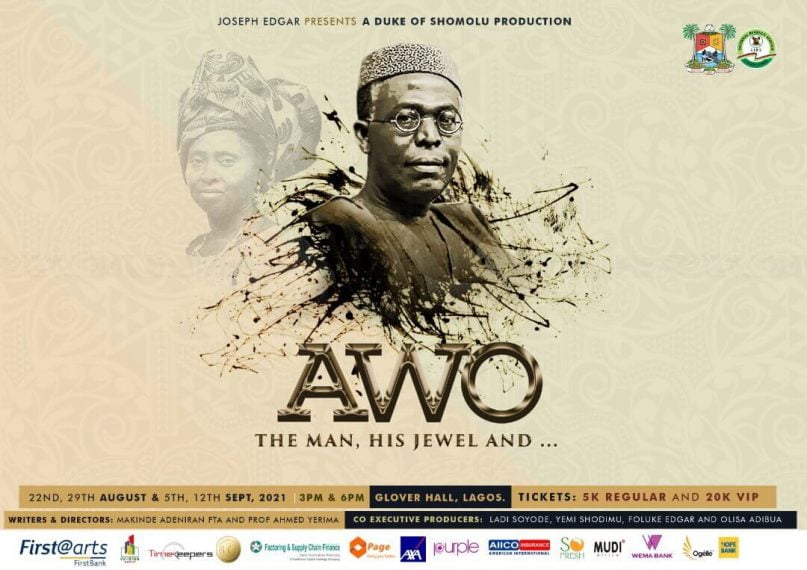 Vice President Yemi Osinbajo; his wife, Dolapo; and Governor Babajide Sanwo-Olu of Lagos State among others on Sunday watched the stage play of the drama: “Awo.”

It took place at Glover Memorial hall, Marina, Lagos, which was recently renovated by the Lagos State Government.

Dolapo is a grand-daughter of the late Chief Obafemi Awolowo in whose honour the play was put together.

The play: “Awo the Man, His Jewel and…” written by Makinde Adeniran, was a celebration of the life and times of late Awolowo and his wife, Dideolu.

The play, intended to examine the meaning of leadership, was packaged by the Duke of Shomolu Productions.

It is a human narrative of the history of a man devoted to humanity.

Copiously choreographed, it is an enactment of the interplay of factors in Nigeria’s struggle for independence with the late Awo as focus.

Sanwo-Olu, in his remarks, said he was proud of the work and its significance to Lagos.

“Let’s bring history, culture, entertainment and theatre back to Lagos,” he said.

The governor said that Awolowo was imprisoned at Ibeju-Lekki, adding that it was his blessings that led to the massive development currently being witnessed in Lekki.

On his part, Segun Awolowo, a grandson of Awolowo and Executive Director, Nigerian Export Promotion Council, applauded the script writer and producer for a wonderful performance.

He said he particularly impressed with the musical effects in the play.

According to Gbajabiamila, the late nationalist was brought to life through the show.

He commended the producers, writer, musicians and entire crew.

Adeniran, Director and writer of Awo, told newsmen that the intention was to begin to reengineer the system of leadership.

Adeniran said: “One of the things that we all can testify to today is that Nigeria needs to relearn leadership.

“So, we chose the person of Awo, representing those old figures.”