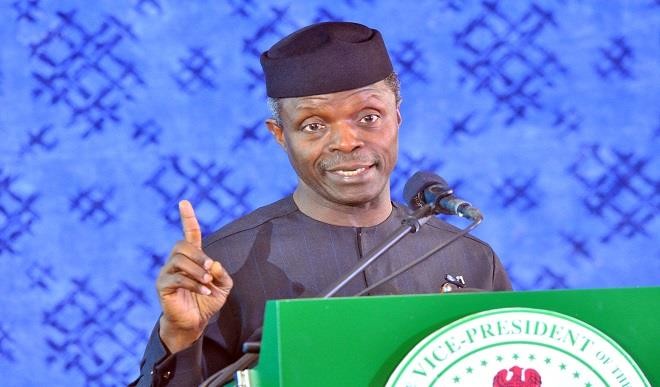 Vice President Yemi Osinbajo has reassured stakeholders in the entertainment industry of the Federal Government’s commitment to support them to enhance national growth and development.
Osinbajo gave the assurance at an event organised for entertainers, tagged: “An Evening with the Vice President,” in Lagos on Friday.
Hundreds of entertainers, including actors, comedians and musicians, were among creative artistes present at the event.
Osinbajo said: “No sensible politician can ignore entertainers; if you do, you do so at your own risk.
“Entertainers also cannot ignore politicians; it is impossible.
“If you do, you do so at your own peril.”
Osinbajo noted that some entertainers were already in politics and urged others to participate in order to make a change and a difference.
The Vice President said he had met frequently with entertainers with a view to developing policies around the industry for economy growth.
He said the government decided to create Technology and Creativity Advisory Council to see how it could move the industry forward through proper policies.
Osinbajo said one of the policies raised was how to address the issue of piracy.
He said: “Already, there is a lot going on.
“Your industry has to respond to what is going on.
“This industry is important and crucial to our economy.
“We must set up the environment that will make it happen.
“No environment is completely ready.
“hatever it is that we have at the moment, we have to make the maximum use of it to grow this industry.
“Your support is actually important.
“What we need to do is to sit together and solve the problem.
“The country is what it is today because some people stole the treasure.”
According to Osinbajo, if the government ignores the industry, it does that at its own risk.
He noted that the Federal Government had signed treaties with some other countries in a bid to grow the industry.
He, therefore, urged the industry to support the government in the anti-corruption campaign, adding that the government was putting the necessary measures in place to create the enabling environment for the private sector to thrive.
Osinbajo said the government would use technology to solve the problem of piracy, to make life easier for stakeholders in the industry.
He added that the Federal Government was also looking at providing intervention funds for practitioners through the Bank of Industry in a transparent manner.
He said: “The entertainment industry must be ready to work with the government so as to do things properly through policies.
“We must do it and deliver.
“We must be committed to the future of this country.”
In his remarks, Governor Akinwunmi Ambode of Lagos State noted that the state had always been the hub for entertainers and would continue to support the industry to grow the state’s Gross Domestic Product.
Ambode called for synergy between the government and entertainers in order to create a convergence to grow the economy of the state.
Also speaking, Senator Goodwill Akpabio, who promised to support the industry as he had been doing, assured the entertainers of government’s readiness to help them on issues of legislation.
Akpabio, who noted that the artistes were ambassadors of the country, urged them to promote Nigeria’s oneness.
Many of the artistes who spoke at the event identified the challenges in the industry as piracy, distribution of artistic works, poor power supply, lack of infrastructure, censorship, licensing and access to credit facilities among others.
Emeka Aduah, the Chairman, Film and Video Producers and Marketers Association of Nigeria, who noted that the challenges facing the industry were huge, urged the Federal Government to assist in the fight against piracy
Aduah said: “This industry is yearning for support of this government for the growth of this industry and the country.”
An artiste turned politician, Desmond Elliott, said: “The problems facing the industry are enormous.
“The industry is suffering and there is a lot that can be done in the area of funding, copyright and others.
“Nollywood and music have taken this country high.
“I see no reason why we don’t want to grow this country.
“It is lucrative and can create a lot of jobs.”
Many other stars in the industry took turns to plead for government’s support for the industry.