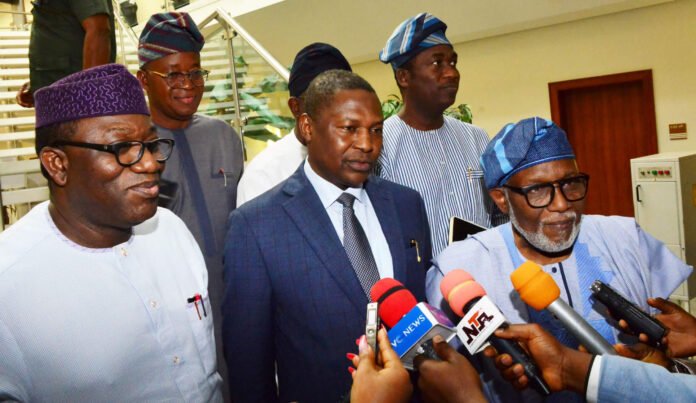 Vice President Yemi Osinbajo (SAN) has met with the South West Governors; Attorney General of the Federation and Minister of Justice, Abubakar Malami; and the Inspector General of Police, Mohammed Adamu, over the South West security outfit, Amoteku.
The meeting took place on Thursday in Abuja at the Presidential Villa.
The meeting was said to have been at the instance of the Governors who had asked to see President Muhammadu Buhari over the controversy surrounding the Amotekun Initiative.
However due to the President’s foreign engagement, he asked the Vice President to host the meeting.
A statement by presidential spokesman, Laolu Akande, said: “The meeting was very fruitful and unanimous resolutions were made on the way forward.
“Having regard to the need for all hands to be on deck in addressing the security concerns across the country, it was agreed that the structure of Amotekun should also align with the Community Policing strategy of the Federal Government.
“It was also agreed that necessary legal instruments will be put in place by each of the States to give legal backing to the initiative and address all issues concerning the regulation of the security structure.”