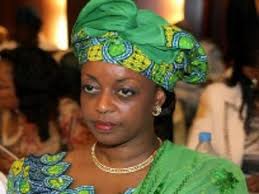 The Minister of Petroleum Resources, Diezani Alison-Madueke, in Abuja on Tuesday said that the Federal Government had no plan to increase the pump price of petrol.
Alison-Madueke said this at the 2014 budget defence of her ministry and its parastatals before the House of Representatives Committees on Petroleum Resources (Upstream and Downstream) and Gas.
According to her, there is a strange rumour that the Ministry of Petroleum Resources is going to announce an increase in the pump price of petrol.
“I said categorically that we have no plan to increase the pump price of petrol anytime in the near future,” she said.
Alison-Madueke noted that the development had only helped to instigate hoarding and diversion of petroleum products.
The minister said the ministry would flood the country with petroleum products next week.
“It was quite obvious that there was a hitch in supplies about a week ago and that had been remedied now,” he said.
She warned that any filling station caught in the diversion of petrol, be it private or government-owned, would be sanctioned accordingly.
The minister, who decried inadequate funding of the ministry, said that it was the intention of the ministry to consolidate on its achievements in spite of the challenges.
“We will continue to bring quality investments to the petroleum sector,” Alison-Madueke said.
Meanwhile, the Chairman, House Committee on Petroleum Resources Upstream, Hon. Muraina Ajibola (PDP-Oyo), has urged the minister to ensure that petrol is available to Nigerians.
On his part, Dakuku Peterside (APC-Rivers) said that the ministry required enough funding because of its importance to the country’s economy.
Peterside enjoined the minister to judiciously utilise the little allocated to the ministry.
The sum of N61.9 billion was proposed by the ministry and its parastatals in the 2014 budget.