David Haye: I want to fight Joshua, not Tyson Fury 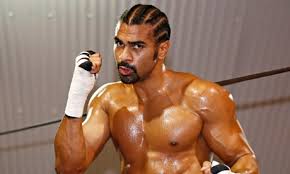 David Haye has ruled out fighting Tyson Fury this year and is instead aiming for a bout with Anthony Joshua as well as earning a shot at the WBC or IBF world heavyweight titles.
It has been three-and-a-half years since Haye (26-2, 24 KOs) last appeared in a professional ring and it was assumed he had retired after being forced to pull out of a fight against Fury in 2013 with a shoulder injury.
But Haye, 35, will fight again at the O2 Arena in London on Saturday, with claims that more than 14,000 tickets have already been sold for his comeback in a 12-round non-title bout.
The former world heavyweight and cruiserweight world champion faces Australian Mark de Mori (30-1-2, 26 KOs) and is planning a busy schedule to help get him back into world title contention.
But Haye does not expect to fight fellow Briton Fury, the WBA and WBO world heavyweight champion, late in 2016.
Fury, 26, is due to face Wladimir Klitschko in a rematch after out-pointing the Ukrainian in an upset in November. Fury also captured the IBF belt for beating Klitschko, but the IBF stripped the Manchester boxer of their title for agreeing to a rematch instead of facing Ukrainian Vyacheslav Glazkov next.
Glazkov disputes the vacant IBF title with American Charles Martin in New York on the same bill as American Deontay Wilder’s defence of his WBC title against Poland’s Artur Szpilka, also on Saturday.
“Fury is not at all on my agenda for this year,” Haye said ahead of the fight, for which tickets can be bought from axs.com as well as being screened live on Dave.
“One of the first statements he said after winning the title was that he’s not going to fight me, and would rather relinquish the belts.
“If he doesn’t want to fight me, fair enough. I don’t really care. My goal is not to beat Tyson Fury, but to become world heavyweight champion and that’s about who ever has got the belts.
“The vacant IBF title is being fought for the same night as my fight and there is also the WBC champion Deontay Wilder and the unbeaten Anthony Joshua who looked fantastic against Dillian Whyte and answered a lot of questions.
“Joshua is highly ranked and has a 100 percent knock out ratio and I believe our paths will cross, whether it is in an eliminator or for a title.
“So the division is good and I deserve to be in the mix. But that only happens with a good performance against De Mori.
“As an athlete, when you believe in your heart you have the tools to be the best but you’re not physically able to do that it’s very frustrating, but those days are well behind me now and I believe that in the next year to 18 months there will be a belt around my waist.”
Haye insists Joshua, the 2012 Olympic gold medallist who is based in north London, is ready to face him this year after knocking out all 15 of his professional opponents.
“Is Anthony Joshua ready for me? Yeah,” Haye said.
“If a young fighter who is 6-foot-6 and in perfect physical condition, who is in the prime of his life, with a 100 percent KO ratio, British and Commonwealth champion, ranked highly in the top ten in the world by some governing bodies … I definitely think he’s ready to fight someone who has not had a fight in three and a half years, who is a former world champion.
“If you’re not ready to fight me now, then what does he need to do to become ready?”