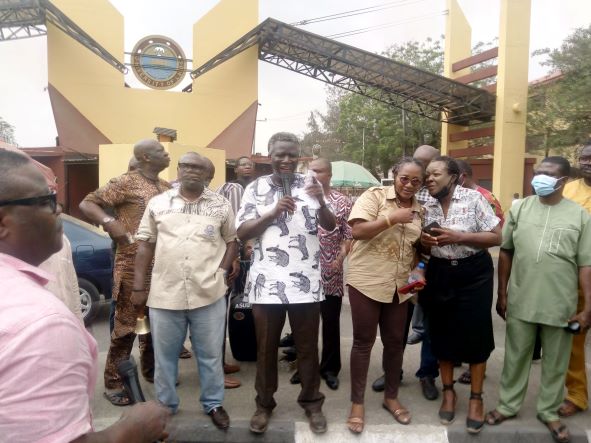 The Lagos Zone of the Academic Staff Union of Universities has again warned of an impending strike should government fails to meet its demands.

The Zone’s Coordinator, Dr, Adelaja Odukoya, gave the warning at a news conference on Tuesday at the University of Lagos.

Odukoya addressed the press after a congress to sensitise and mobilise members on the proposed action.

He said that the National Executive Committee would be meeting over the weekend to deliberate extensively on the issue and thereafter take a definitive position.

The News Agency of Nigeria reports that the National Executive Committee of the union recently renewed its threat to embark on strike over alleged non-implementation of the Memorandum of Action it signed with the Federal Government.

NAN reports that the union is also agitating against poor funding and refusal by the Federal Government to sign and implement the renegotiated 2009 agreement they entered into.

It further listed the refusal of government to adopt the University Transparency and Accountability Solution as against the IPPIS as a payment platform in the university system.

According to Odukoya, the union has made concerted efforts at getting the Federal Government to address issues bordering on the welfare and development of the university system without meaningful outcome.

He added that should NEC approved the commencement of strike next week, there would be no going back as it would be total, comprehensive and the mother of all strikes.

He said: “We, therefore, consider it as our patriotic duty to call the attention of government once again and citizens of Nigeria to these issues threatening the industrial peace in our public universities at this critical period.

“The 2009 ASUU/Federal Government agreement provides for a periodic review after every three years.

“However, the Federal Government went into a Memorandum of Action with our union in December 2020, after a nine-month strike we were forced into over funding, condition of service, university autonomy and others.”

According to him, the renegotiation, which was delayed by Dr. Wale Babalakin, the government’s representative, was billed to have been concluded about four years ago.

Odukoya, however, added that with the replacement of Babalakin with Prof. Munzali Jubril, the renegotiation was concluded in May 2021.

He said: “The union is, therefore, perplexed that since the conclusion of the renegotiation nine months ago, government is yet to sign and implement the renegotiated agreement.”

He noted that members of the union were frustrated and increasingly agitated by government’s apparent reluctance on the important issues of welfare and existential condition.

Odukoya also wondered why President Muhammadu Buhari would not meet the leadership of the union and hear firsthand information from them rather than rely on aides who allegedly had the mindset of tilting reports to suit their personal interests.

The Coordinator then called on well meaning Nigerians to prevail on government to have a rethink on the development to forestall the impending action the union was being forced to embark on.

On his part, Dr. Dele Ashiru, Chairman of the UNILAG Chapter of ASUU, said the aim of the sensitisation was to prepare members on the planned strike as well as to notify the public on government’s failure to honour the agreement.

He urged Nigerians to hold government responsible should the union embark on another industrial action in not too long a distance time.

Ashiru said: “Today, we call for a sensitisation and mobilisation of members of this zone here in the University of Lagos, to be prepared and that a clarion call may be made any moment from now and that is why it is dovetailing into the NEC meeting coming up on Saturday and Sunday.

“This is no more time for promises.

“We have consistently appealed, cajoled and exhausted all means of dialogue with the Federal Government over these issues that are setting our university system back to no avail.

“We are not strike mongers, we are not happy embarking on strike as a means of driving home our points, but each time we call on government to listen to us and honour agreements, it is like we are not saying anything serious.

“Regrettably, education is linked organically as an agent of development of every nation.

“When nations are faced with challenges, they turn to their universities for solutions and that is why they are called ivory towers.

“Therefore, we must not let these our ivory towers die.”

Ashiru frowned at the proliferation of universities across the country without proper funding, noting that such development was not in the interest of the country.

NAN reports that members of the union embarked on a peaceful protest march from the venue of the congress (on campus) to the main gate of the University of Lagos.