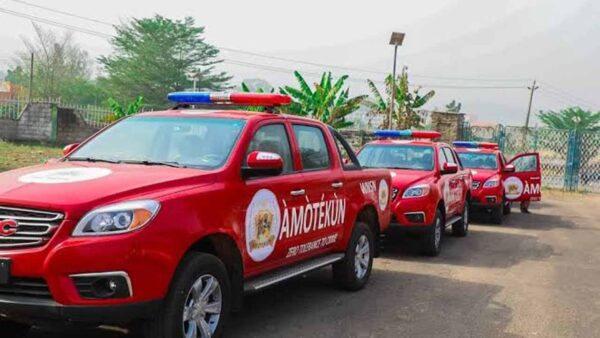 Stakeholders at the Lagos State House of Assembly Public Hearing on Amotekun Bill, including opposition Peoples Democratic Party, on Monday pledged their support for the establishment of the security outfit in the state.
They spoke during a one-day stakeholders forum on a bill for a law to amend the Lagos State Neighbourhood Safety Corps (LNSC) Agency Law, 2019.
The PDP Chairman in Lagos State, Adedeji Doherty, said the party was in support of the Amotekun Bill, but urged the state to employ only qualified people for the corps.
Doherty, represented by Sunday Olaifa, advised the state government not to employ Amotekun personnel on party, religious or ethnic basis.
Also, Chairman, Agbekoyas in Lagos State, Oladipo Davis, said the group had the ability to fight crimes without using arms or weapons.
Davis said: “Let us employ those who know the job. We should not use just anybody. Agbekoyas have the power to cope and fight criminals.”
The General Secretary, Coalition of Oodua Group, Rasak Olokooba, said the lawmakers should define the roles of state and federal governments in Amotekun.
Contributing, Gbenga Ekundayo of Trade Union Congress said there could not be economic growth without putting in place adequate security by the government.
Ekundayo noted that the Amotekun Corps would need technology such as data gathering and records of the people in the communities.
The representative of the Christian Association of Nigeria also said the Church was in support of Amotekun Bill and assured that the Body of Christ would pray for the success of the corps.
Alhaji Ibrahim Abubakar, who spoke for the Seriki Hausawa of Alimosho, suggested that people should be careful about provocative statements.
A security consultant, Dickson Osagie, urged the government to emphasise proper training of Amotekun personnel.
Osagie added that insufficient parenting had been contributing to the high rate of insecurity in the state.
In his contribution, another security expert, Gboyega Alowonle, said the state assembly should look into the recruitment of personnel and training of the Amotekun corps.
Alowonle said: “Let us ensure that the personnel go through due diligence, and Community Policing is also important.”
Earlier, Chairman, House Committee on Information, Publicity, Strategy and Security, Tunde Braimoh, said Section 14 (B) of the 1999 Constitution identified security as the number one job of the government.
Braimoh explained that the public hearing was meant to stimulate discussions on the law.

Buratai to troops: I’m aware of your successes, setbacks but Boko Haram must be crushed