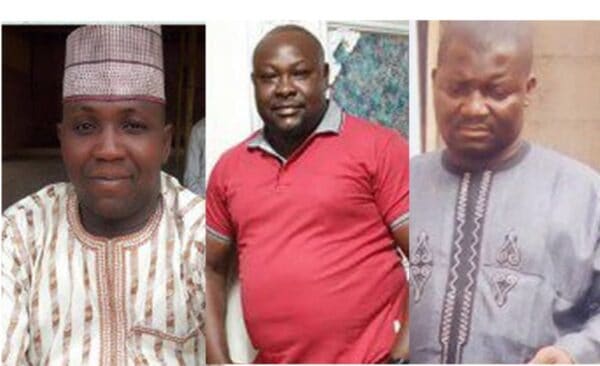 Suspected kidnap kingpin, Alhaji Hamisu Wadume, who caused the killing of three operatives attached to the Inspector-General of Police Special Intelligence Response Team and a civilian in Ibi, Taraba State, has been described as a philanthropist who bought a car for the Nigerian Army Captain that ordered their killing and other people.
According to a credible source, Wadume became a person of interest to the IRT, headed by a Deputy Commissioner of Police, Abba Kyari, following series of investigations that had his name mentioned by suspects arrested in different kidnap cases.
It was gathered that nine months ago, Wadume was so poverty stricken that he couldn’t feed himself.
But he sudden catapulted into wealth, building houses, buying cars, motorcycles and buses for people.
The source said: “In Taraba and Nasarawa States, there have been series of kidnappings.
“In one of those abductions, a business mogul was kidnapped and N100 million collected from him.
“There was another where the kidnappers collected N25 million and then another N60 million and many others.
“It was during investigation that IRT operatives stumbled on his name and operations.
“As at last year, he couldn’t feed himself, let alone to cloth himself.
“He was poor.
“But suddenly, within nine months, he became a multi-million.
“He built houses and bought cars.
“Nobody knew the source of his wealth.
“He bought motorcycles for over 60 people and bought cars for people for commercial purpose.
“Suspects arrested for their involvement in kidnapping even mentioned his name.
“One of them disclosed that their overall leader lives in Ibi.
“He doesn’t go to operation with them, but always appears during collection of ransom.
“The suspect said that he didn’t know his house.
“The team went to Ibi and successfully arrested him.
“Before the team went to Ibi, they did a letter to the Taraba Commissioner of Police and the Area Commander, who then did a letter to the Divisional Police Officer in charge of Ibi Police Station.
“The DPO endorsed the letter and the men moved to make the arrest.
“There was only a narrow road to the village.
“They saw the soldiers on three checkpoints and introduced themselves.
“After arresting Wadume, they went to the police station to book out.
“That is the norm.
“When you book in, you have to book out.
“The soldiers are on the payroll of the kidnapper.
“They didn’t want him to have the opportunity to testify and mention them during confession.”
A citizen of Ibi, Daleehat Suleiman Bente, wrote on Facebook page: “Wadume is the guy, who many believed became rich over night with people questioning his source of wealth, having known his traceable history and antecedent.
“He is now at large after he was allegedly freed by the army while they dispose the police conveying him to Jalingo, the state Capital, from Ibi his hometown, where he was arrested.”
Bente explained that he lived in Ibi while growing up and had friends still living there.
He said that he had to ask them about Wadume.
He was told that Wadume became a millionaire overnight, with no traceable job to his name.
This he said, made many people to speculate that he was either into money ritual business or kidnapping, which has now became an emerging lucrative business in Southern Taraba.
Bente said: “Wadume is very kindhearted to the community and the Army stationed in Southern Taraba.
“He is a charity and cheerful giver who can spend up to N20 million a day settling bills of the less privileged in his community.
“Wadume is the only philanthropist in Ibi Local Government Area that has empowered and still empowering the youths, either by giving them interest free loans as capital to start up a business or purchasing of vehicles, motorbikes and flying boards for them to do commercial and earn a living.
“And for his relationship with the Army, it is said to be very cordial because he is their  leading benefactor in terms of welfare and other privileges.
“Despite his charity gesture to the community, there was still scepticism about his source of wealth, prompting some people to relate the matter to the Police, who placed him under serious investigations for months before carrying out that sting operation that led to the encounter with the military.”

Motorcyclist in court for allegedly stealing banana worth N1.8m

I regret not being featured in Davido’s video – Waje