Why I didn’t support Adeleke during Osun governorship rerun – Omisore 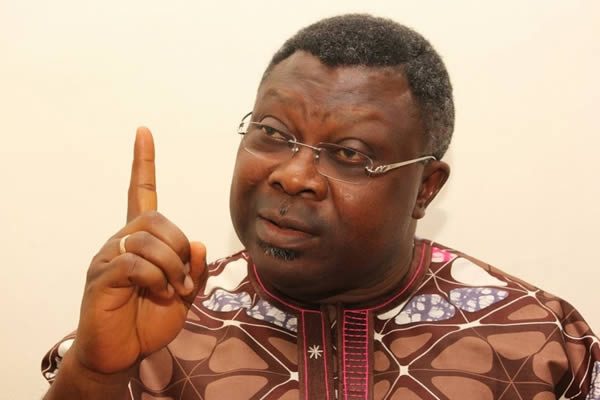 Share
Facebook Twitter LinkedIn Pinterest Email
The governorship candidate of the Social Democratic Party in Osun State, Senator Iyiola Omisore, has offered reasons why he did not support the candidate of the Peoples Democratic Party, Ademola Adeleke, for the rerun election in the state.
Omisore offered the reason in Osogbo, the state capital, on Thursday during a meeting with members of his party from across the 30 local government areas of the state.
He said he opted to support the candidate of the All Progressives Congress, Alhaji Gboyega Oyetola, in the rerun because the leadership of the PDP in the state said they did not need his support.
Omisore, who defected from the PDP to the SDP some months before the election, said former Vice President Atiku Abubakar wanted to come and discuss with him before the rerun when he came to Osogbo but he was prevented from coming by the leadership of the PDP in the state.
A former Nigerian Ambassador to the Philippines, Dr. Yemi Farounbi, had said this while narrating why Omisore decided to work for the APC candidate in the rerun supplementary poll held on September 27.
Farounbi said the same thing and Omisore, while addressing the party members, said he adopted everything the former envoy had said.
He said the party opted to support the candidate of the party that was ready to implement the manifestos of the SDP because the party was for the best interest of the majority of the people.
Omisore said: “I want to adopt all what Dr. Farounbi said.
“We gave them (APC and PDP) our manifesto.
“We dwelled on payment of arrears of salaries, pensions and gratuities, on local content, employment for our youths and the reorganisation of the educational system, among others.
“We went to negotiation with a clear mind that Osun must be free and thank God our coalition has produced a new future for the state.
“In addition to what Dr Faroumbi said, the National Chairman of the APC, Adams Oshiomole, said clearly that our discussion was devoid of any financial commitment.
“He said they were ready to work.”
Speaking earlier, Farounbi had explained that the SDP leaders decided to support any political party that was ready to put the people of the state first, adding that Omisore earned his respect more because he was selfless in arriving at who to support.
He said the issue of arrears of salaries, pensions and gratuities which had impoverished workers and pensioners was given priority.
The reorganisation of the education sector and local content were also prominent on their agenda.
Farounbi said: “Apart from these, we also said the state must return to 6-3-3-4.
“That contracts and services must be given to Osun indigenes, that infrastructural development and food security must be given priority because our people must not be hungry and they agreed.
“The Senate President, Senator Bukola Saraki, was the first to come and he came from the airport to Ile-Ife with some senators and Dr. Doyin Okupe.
“We gave him our manifesto and we waited for 24 hours but no response.
“We heard that they were saying that we wanted to reap where we did not sow.
“We heard that they said they would win without us and all that.
“Also, former Ogun State Governor, Gbenga Daniel, who is the Director General of Atiku Abubakar Presidential Campaign Organisation, called and said they were in Osogbo and they would come to see us.
“But they did not come.
“But former Vice President Atiku Abubakar called and expressed his regret for not being able to come.
“He said he wanted to come but the leadership of the PDP in Osun State said they should not come because they didn’t need us.
“That we should go and do anything we liked.”
Ademola Adeleke apc Atiku Abubakar Gboyega Oyetola Iyiola Omisore Osun State PDP SDP Yemi Farounbi
Share. Facebook Twitter Pinterest LinkedIn Tumblr Telegram Email