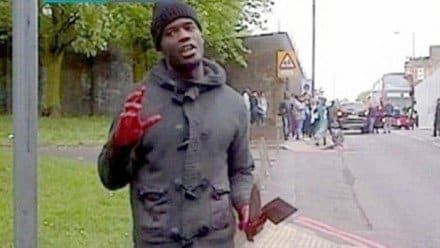 Share
Facebook Twitter LinkedIn Pinterest Email
Michael Adebolajo, 31, a Nigerian, has been described by United Kingdom prison officials as the most dangerous prison inmate in the country.
According to the officials, Adebolajo is violent, unpredictable and a Muslim extremist.
The inmate is said to be keen on radicalizing other inmates into his twisted beliefs in Islam.
The inmate was said to be a major danger to other prisoners due to his ability to radicalise other inmates.
Adebolajo was charged and sentenced to life imprisonment for the murder of a British soldier, Fusilier Rigby Lee (25), an act that was carried out alongside another Islamic extremist, Michael Adebowale.
The said Adebowale was sentenced to 45 years imprisonment.
They hacked to death a defenseless Lee beside his barracks, dragged his body to the middle of the road and waited for the police to arrive.
The attack on the soldier was a revenge on the British military for what they called inhuman killings of Muslims by the British military, prison officials said.
According to another prison official, Adebolajo spends most of his mornings teaching and preaching his twisted belief of Islam to anyone who cares to believe.
The official said that this has caused other inmates who had accepted his ideology, including those who were never Muslims, to pledge to become jihadists and extremists, once they are released from prison.
The official further noted: “He has a big personality and is very charismatic, and some of the more vulnerable prisoners falls under his spell. He is a very dangerous individual. Adebolajo now sees his role in life to recruit as many jihadists as possible for the remainder of his life. He sees every inmate as a potential Islamic state soldier whether they are Muslims or not.”
As a result of his extremely overwhelming effect on other inmates, Adebolajo was moved from Belmarsh Prison in South London to HMP County Durham Prison, which is said to be Britain’s most notorious prison facility.
Michael Adebolajo Michael Adebowale Nigerian United Kingdom
Share. Facebook Twitter Pinterest LinkedIn Tumblr Email