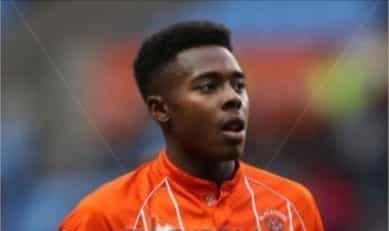 Tottenham Hotspur has been linked with a move for Blackpool starlet, Bright Osayi-Samuel, but reportedly face opposition from Arsenal, Everton and a new challenger in Steve Bruce’s Aston Villa.
The contract of the 19-year-old winger-turned-striker, who was born in Nigeria, runs out in the summer, although it is believed that the Seasiders have the option to extend it for another year.
The speedy attacker has plenty of tricks in his armoury and has been heavily scouted by Premier League clubs, including Spurs and their north London rivals, claim the Birmingham Mail.
Bright Osayi-Samuel has made a big impression in League Two this year Blackpool boss Gary Bowyer admits he is powerless to stop the talented teenager leaving.
“My philosophy is simple, if people are coming to watch us, then it is a sign that we are doing something right and are helping players to progress,” he said.
“We have some good young players here and it does not surprise me. If there is a young player playing regular first-team football anywhere up or down the country, then the big boys have to do their job properly.
“Do I want to lose any of the players? No, but I realise we are in League Two.”