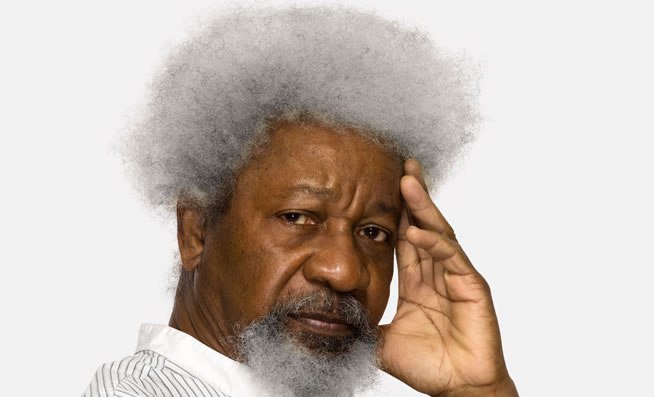 Nobel Laureate, Prof. Wole Soyinka, has advised the Federal Government to solicit support of international community if it could not cope with the insecurity bedevilling the country.
Soyinka gave the advice on Thursday in Makurdi when he visited Benue Governor, Samuel Ortom.
He expressed certitude that the international community would come to the aid of Nigeria in tackling the security challenges in the country.
He said: “Instead of treating the country of its cancerous disease rather, it is ringworm that is being treated.
“The killings that are taking place in Benue and other states are targeted at ethnic cleansing and there is no any other word to describe it than that.”
Soyinka said that instead of hunting animals for food, the killer herdsmen hunted for human beings, adding that the act was barbaric.
He disclosed that some people wanted to change the narrative that the killer herdsmen were Libyans, querying “who brought them, who kept them and who funds them?’’
The renowned noted that herdsmen “kill and occupy people’s communities which clearly reveal their actual motive’’.
He urged the Federal Government to give marching orders to the herdsmen that were occupying communities that were not theirs to vacate them in 48 hours.
Soyinka said: “We have to come together to probe the ugly situation so that the impunity which is going on in the country for long will stop.
“If the President had visited any community where lives were lost due to the killings perpetrated by the armed herdsmen and give warnings, the killings would have stopped since.”
According to Soyinka, the killings are sponsored by desperate politicians because of their selfish motives, and the killings are not sporadic but well-coordinated and the people behind the killings should be identified for prosecution.
He said that the phenomenon was not new because it happened in Rwanda and other crisis-ridden countries, “so Nigerians ought to have learnt from Rwanda to avoid the situation turning to an epidemic’’.
Responding, Ortom thanked the Nobel laureate for the solidarity visit, acknowledging that he had always identified with the state in all situations, especially calamities.
He added that he had told the world of what the state was going through, particularly its security challenges.
Ortom said: “What is happening to us is not a hidden agenda because the herdsmen, through Miyetti Allah Kautal Hore, had said at several fora that they want to take over the Benue valley.
“The attacks are also the continuation of the jihad which was truncated by the Benue people in 1804.”
He stated that he had all evidence to buttress what he was saying and that armed herdsmen were perpetrating the heinous acts with impunity.
The governor deplored the latest case of the killing of people who attended the mass burial of the two priests and 17 other parishioners, by herdsmen on Tuesday while returning home.
The burial took place at the Se Sugh Maria Pilgrimage Centre, Ayati, Gwer Local Government Area of the state.
He said: “We will continue to demand for justice and believe that security agencies will live up to their responsibility by nipping the killings in the bud.”