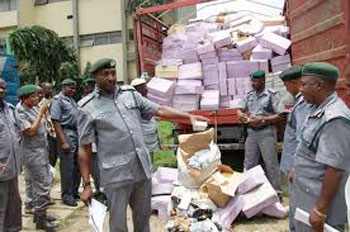 The Seme Area Command of the Nigeria Customs Service has arrested of two men, Taofiq Oyewale and Segun Oyinola, who disguised as mourners to smuggle into the country a L450 Jeep.
The men had decorated the Jeep they were smuggling into Nigeria with the posters of a dead person.
This was made known on Tuesday by the Public Relations Officer of the Same Command of the NCS, Taupyen Selchang, who said this is a new strategy adopted by smugglers.
Selchang said the smugglers also used a waste disposal truck as tool of disguise, adding that men of the command examined a waste disposal truck and found 534 pieces of used tyres in it.
He said the two suspects arrested in connection with the crime were undergoing interrogation and prosecution by the legal department of the service.
The Area Controller, Seme Command of the NCS, Mohammed Aliyu, was quoted as saying that no amount of antics devised by smugglers would go undetected by the officers.
Aliyu added that implementing the policy of the Federal Government on the ban of new and fairly used vehicles through the land border was a task that must be done by officers of the command.