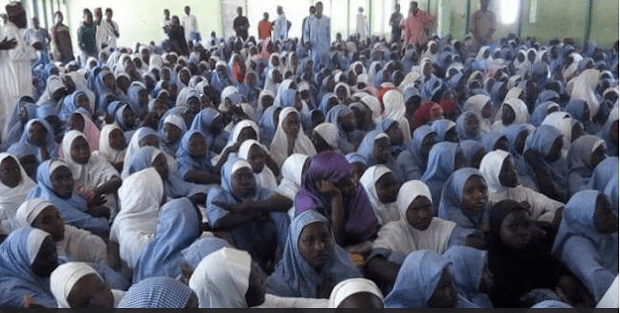 The rescued Dapchi schoolgirls have been taken to the General Hospital in Dapchi for profiling by the military, the News agency of Nigeria reports.
A parent of one of the girls, Malam Ali Abdullahi, told NAN that all the girls were in their various homes now.
Abdullahi said: “Immediately the insurgents dropped them from the truck that they were brought in around 8 a.m., the girls all ran home.
“Now, the Army told us to bring them to the hospital for checking.
“As you can see some of the parents are not willing to let their daughters out of their sight. But the Army are insisting.’’
NAN reports that vehicles have been stationed at the hospital to convey the girls to Damaturu.
Most of the girls at the hospital looked malnourished and wore Hijab (Islamic head and body cover).
Meanwhile, the Minister of Information, Alhaji Lai Mohammed, has confirmed the release of 76 of the girls, adding that ‘’process for the release of others is ongoing’’.