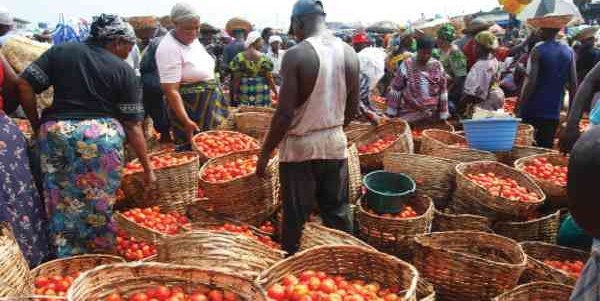 Ahead of Ramadan, prices of tomato and pepper have soared by 60 per cent in some markets in Lagos, the News Agency of Nigeria reports.
A NAN survey conducted at Mile 12, Oke Odo, Oyingbo and Iddo markets, Lagos, reveals that a 40 kilogramme (kg) basket of tomato, which cost N5,000 two weeks ago has risen to N12,000.
Similarly, a 50 kg basket of bell pepper (tatashe) has risen to N12, 000 from its previous price of N6,000; 50 kg Chilli pepper (sombo) costs N9,000 as against N5,000, while of a basket of scotch bonnet pepper (rodo) costs N13,500 as against N9000.
Alhaji Haruna Mohammed, Market Leader, Mile 12 Perishable Traders Association, attributed the price increase to off-season effect and cost of transportation.
He, however, maintained that the prices of the food items were still relatively cheaper compared to the same period two years ago.
Mohammed said the influx of perishable food items from South-West states and Cameroon into the market would augment the shortfall of supply from the north, and ensure that their prices were not too expensive.
Conversely, the price of a bag of onion decreased from N15,000 to N13, 000; 25-litres of palm-oil dropped from N9000 to N8,200 and five litres vegetable oil cost N2400.
Also, a bag of beans (Olo 2), which had been stable since March declined to N16, 000, as against N17,200 last week.
Alhaji Musa Yahaya, a beans seller at Iddo market, said the Ramadan season often spiked the price of beans, but the reverse was the case this year.
Yahaya said: “Beans is one of the most consumed food in Nigeria, especially during Ramadan, people purchase beans to make ‘akara’ (bean cake) and ‘moi-moi’ (another local delicacy) for the fasting period.
“The declining prices of commodities would encourage people to focus on their fast and prayers with little concern about cost of food.”
He said many farmers through the Central Bank of Nigeria Anchor Borrowers’ Programme cultivated beans, maize and other crops on large expanse of land, thus aiding price drop in markets.
Yahaya urged the Federal Government to sustain programmes that would boost food production in the country.