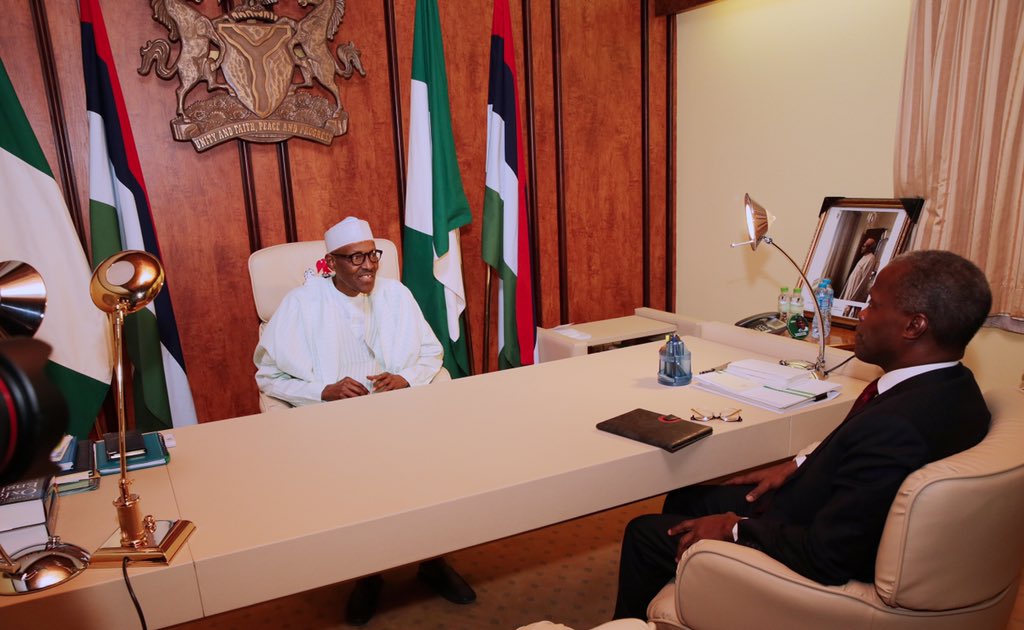 President Muhammadu Buhari on Monday resumed duties, but working from home.
Available information is that for now, Buhari is to work from the office in his residence within the Presidential Villa in Abuja.
The President’s Personal Assistant on New Media, Bashir Ahmad, confirmed this development in a series of tweets on Monday.
Ahmad said Buhari will be working from home in the next few weeks as his office in the Presidential Villa, popularly called Also Rock, is undergoing repairs.
Ahmad, tweeting from @BashirAhmaad, in reaction to a comment made on his Twitter handle, said: “Mr. Stanley, In case you don’t know, Nigeria’s President has many offices, including the one in his residence.
“Some renovations are on going at the office. He’s a fully equipped office in his residence, he’ll be back to the main office after the works.”
Buhari on Monday from the office in his residence met behind closed doors with government officials, including Vice President Yemi Osinbajo, and some presidential aides as he formally resumed duties in the Presidential Villa, Abuja.
Presidential aides, including the Chief of Staff to the President, Malam Abba Kyari, and the President’s Special Adviser on Media and Publicity, Femi Adesina, were among the early callers at the President’s office.
Alhaji Kawu Sumaila, the Senior Special Assistant on National Assembly Matters (House of Representatives), was also in the President’s office to collect the Letter of Resumption of duties for onward transmission to the National Assembly.
Osinbajo, who received the President on arrival from London on Saturday at the Nnamdi Azikiwe International Airport, Abuja, also met behind closed doors with Buhari in his office for about two hours.
Governor Tanko Al-Makura of Nasarawa State was also sighted moving towards the President’s office.
The News Agency of Nigeria said it reliably learnt the President may be receiving more visitors, including some Service Chiefs and cabinet ministers, who are expected to brief him on developments in their respective Ministries, Departments and Agencies.
Buhari, who returned to Abuja Saturday on after a successful medical vacation in London, had earlier on Monday addressed Nigerians in a nationwide broadcast where he reassured them that his administration would continue to ensure Nigeria’s unity.