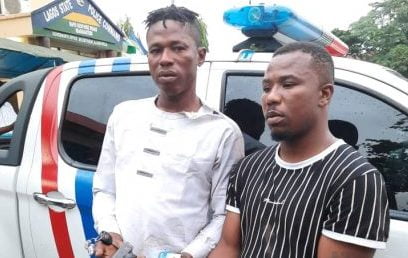 The suspects: Samuel Akabueze, 31, and Onuoha Joshua, 37, both from Imo State, were arrested for driving a Lexus SUV with registration number LSD 666 GK “suspiciously” along Akowonjo Road.

RRS operatives trailed them to the point of arrest, “after suspecting them of underhand dealings,” a statement by the state’s command of the police said.

Exhibits found on them include a locally made gun with two rounds of ammunition, four ATM cards (EcoBank and Access Bank), charms, BRT cowry card, two different keys of another different Lexus SUV and a motorcycle.

“Upon interrogation, they were found to be notorious criminals perpetrating a series of robbery incidents across different locations in Lagos,” the statement added.

It said that both suspects also confessed to being members of the Aye Confraternity.

Teenager in court for robbing man of N2,000 phone