Osinbajo speaks on stepping down for Tinubu 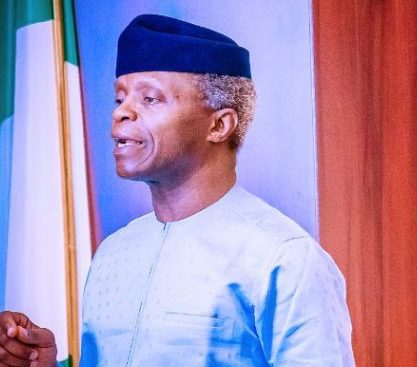 The Vice President and presidential aspirant on the platform of the All Progressives Congress for the 2023 elections, Professor Yemi Osinbajo (SAN), has reacted to reports that he had been asked to step down for a National Leader of the party, Asiwaju Bola Ahmed Tinubu.

Osinbajo’s reaction was contained in a statement by the President Yemi Osinbajo Presidential Campaign Council.

The statement on Sunday, signed by the Chairman, PYO Media Council, Richard Akinnola, was in reaction to a news that made the round during the day that the General Overseer of the Redeemed Christian Church of God, Pastor Enoch Adejare Adeboye, and the Founder of Living Faith Church Worldwide, also known as Winners Chapel, Bishop David Oyedepo, has asked Osinbajo to step down for Tinubu.

Osinbajo, a Pastor with the RCCG, according to the report, had immediately complied.

The statement by Akinola said: “Regarding the fake news making the rounds that Prof. Yemi Osinbajo, SAN, has stepped down, be aware that this is just the handiwork of those who are afraid of the huge and rising political support base of the Vice President as the primaries draw near.

“Prof. Osinbajo is not contemplating any such idea as all available empirical data and ensuing developments strongly demonstrate that the VP is the leading aspirant.

“The latest of such is the recently completed report of the party’s Presidential Screening Committee that shows he is the leading APC presidential aspirant.

“We want to assure all Nigerians that the PYO Presidential Campaign team is ready for the primaries and very sure of victory.

“It is our earnest expectation that all delegates participate fully in the political process and provide the right direction for the future of our country as we prepare for our party’s presidential primary.”

The statement also spoke on preparations for the party’s primaries, scheduled for June 6 to 8, 2022.

It said: “The PYO Presidential Campaign Council welcomes all our distinguished delegates from across the country to Abuja for our presidential primaries starting tomorrow.

“Ahead of the primaries, a group of civic minded volunteers under the auspices of the PYO Volunteers Support Network has finalized plans to set up mobile clinics, fixed health posts, accommodation assistance and other logistics support for delegates, convention working committees, among others participating in the APC Special Convention.

“For instance, there will be a 24/7 helpdesk line that delegates can call if there is an emergency so as to provide first aid, outpatient care and use available ambulances to evacuate to the nearest hospital if necessary.”