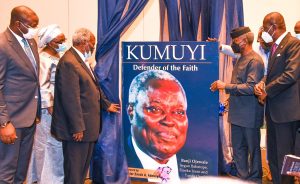 Osinbajo gave the charge in Lagos during the public presentation of a book entitled ‘Kumuyi, Defender of the Faith’.

The book is a biography of Pastor Folorunsho Kumuyi, Founder and General Superintendent of Deeper Christian Life Ministry.

The vice president said paying the pentecost tax would ensure that Christians adhere to the teachings of Jesus Christ.

He said that every person, especially those who succeed in their endeavours, whatever those endeavours might be, owed the society three forms of taxes.

He said that the social or philanthropy tax was an obligation of the wealthy, or simply those who had to give back to society, or to give to those who do not have.

”The third tax is a civic tax. The obligation of the successful to write their stories, to share the histories of the phenomena they have become, in order to instruct to admonish and to inspire the present and the future.

“For the successful preacher of the gospel of the Lord Jesus Christ, there is a fourth tax. This is the Pentecost tax, which is the obligation of men and women, since the day of Pentecost, the day described in Acts 2, when the Holy Spirit empowered the disciples to preach the gospel to tell the story of their missionary journeys.

“The task is to tell what you have gone through in ministry, and this is a huge responsibility. The saints before us discharged that responsibility. So, we are beneficiaries of the Acts of the Apostles,” he said.

“So the book, ‘Kumuyi, Defender of the Faith’, just begins the work of discharging that tax, that obligation to tell the story of the missionary journey,” the vice president said.

Sanwo-Olu said that there were a lot of things to be learnt by all and generations to come from the personalty of the founder of the Deeper Life Ministry.

He said the book, ‘Kumuyi: Defender of the Faith’, was a very apt way of summing up the life and service of this particular God’s General.

According to him, Kumuyi set aside a very promising career in the Ivory Tower and dedicated himself to advancing the gospel and the kingdom of Jesus Christ, with holiness as the central tenet of his message and ministry.

“A divinely-orchestrated transition from teaching the world how to solve complex mathematical equations, to teaching the world God’s answers to even weightier questions about faith and love and hope and holiness; answers that are ever timely and relevant; and Biblical solutions that will never go out of fashion.

“In the process, Pastor Kumuyi also established a ministry and a church that have grown from very humble beginnings, from a handful of members when it started in 1973, into one of the most formidable and respected spiritual institutions in the world.

“Today, there is no part of the world in which the Deeper Life Bible Church is not represented, a testament to the diligence, perseverance and dedication of Pastor Kumuyi, and very importantly to the abiding grace of God in and on his life.

“When you mention the name William Folorunsho Kumuyi or the Deeper Life Bible Church anywhere, the first thing that comes to mind is holiness, an absolute devotion to living a life that is fully aligned with the precepts and standards of God, an uncompromising commitment to be in the world but not of it, and to place God over and above everything else,” he said.

In his keynote address, an Anglican Bishop, Rt. Revd Dapo Asaju, who titled his lecture, ‘Imperative of Integrity, Transparency and Trust in Leadership, Celebrating the leadership of Pastor Kumuyi, the Defender of Faith’, charged Christian leaders to rescue Nigeria.

Asaju, who is the immediate past Vice Chancellor of the Ajayi Crowther University, Oyo, called on Pastor Kumuyi and the General Overseer of the Redeemed Christian Church of God (RCCG), Pastor Enoch Adeboye, to mobilise other religious leaders to hold a conference.

He called on them to meet with President Muhammadu Buhari to find a lasting solution to the insecurity, corruption and economic challenges facing the country.

Prof. Asaju, while stressing the importance of the public presentation of the biography of Pastor Kumuyi, said biographies were important because people would learn from the lives of such people.