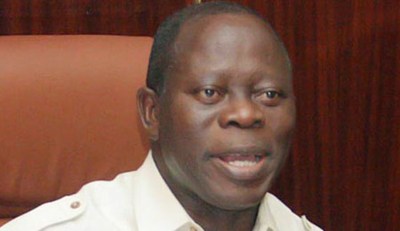 The Edo State Governor, Comrade Adams Oshiomhole, has urged governments across the world to make conscious efforts to connect with the forgotten majority of the people to meet with the changing challenges of development.
Oshiomhole, who made the appeal at the ‘Global Conference on Citizen Engagement for Enhanced Development Impact’, organised by the World Bank in Washington DC, the United States of America, maintained that the challenges of governance are to strike a critical balance.
He said: “As the world changes, we need to keep on reflecting on how to make governance work for everybody.
“We have to recognize that as the world changes, some solutions that worked yesterday may not work tomorrow.
“The forgotten majority determines who governs, but when elections are over, they are generally back to their forgotten rural communities and the few vocal ones get their voice heard.
“They have a way of manipulating what the state do and what they don’t do and for me this is the challenge of many developing countries.”
Oshiomhole disclosed that in Edo State, “we have done a lot to bridge this gap by institutionalizing dialogue at various levels, reaching out to local representatives, reaching out to ward leaders and encouraging them to give us a feed back on what we are doing in various communities and how it is affecting them.”
According to him: “We need to keep on engaging, we need to keep on reflecting on how best to make government work for its citizens because unlike business you have limited share holders, governance is for everybody, the poor, the rich, the literate, the most exposed and in a country where the level of poverty is high, it is even more so that we must make conscious effort to connect with the silent majority.
“From my experience in Edo State, when you do that, you earn greater trust and when you have the trust of the people, you have greater confidence to make radical changes necessary to revive the redistribution of income away from the few who are rich to the majority who are extremely poor.”
The Governor added: “In terms of the resources to deliver the deliverables, when you earn the trust of the people you will have the confidence to put in place policies that will enable you tax those who are taxable and to provide for those who are even not taxable so that at the end there is some kind of social sentiments that will also try to convince them that it is in their interest to meet their own obligation by way of paying taxes.
“We can keep the poorer people busy, which have its own implication for security, for stability and for a more caring society which everyone need if we are going to have a more peaceful environment to live in.
“We remind the citizens and encourage them to know that the power actually belongs to them and that is why in our campaign slogan we say let the people lead and by this we mean let them generate the idea. Let us not assume that the world is governed by experts who may have no idea as to how their material condition can be affected. They may not be able to have perfect spoken English, but that does not tell us about their levels of intelligence, appreciation of the issues that affect them in their communities.”
Comrade Oshiomhole said further that since the world is changing, the question of citizen feedback and how that reflects on policy choices is a key issue and how to strike a critical balance in a developing country where the core value of democracy cannot be taken for granted is a challenge of governance.
“We have tried to organize town hall meetings. We go to various communities on a given issue. We invite them to speak to us and we engage in interactive session and all sorts of ideas emerge from such process,” the governor added.
The other panellists were Macon Phillips, Director of Digital Strategy, White House; Luis Revilla Herero, Mayor of the Municipal Government of La Paz, Bolizia; and Robert Gakubia, the Chief Executive Officer, Ministry of Water and Irrigation, Kenya.
The session was moderated by Sri Mulyani Indrawati, the Managing Director of the World Bank Group.