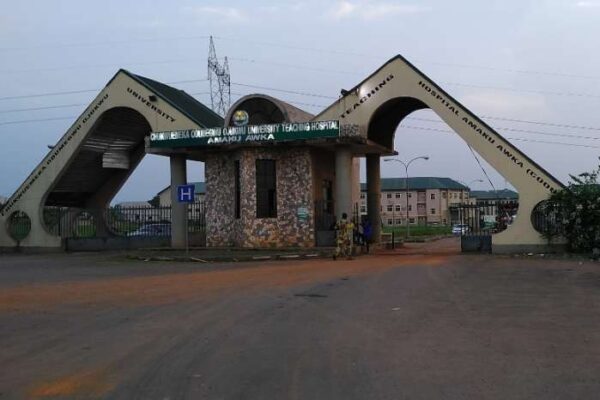 The Medical and Dental Consultants Association of Nigeria, Chukwuemeka Odumegwu Ojukwu University Teaching Hospital, Awka Chapter has called off the strike action it embarked upon six weeks ago.
The Association, in a statement signed by its Chairman, Dr. Chukwudi Okani, and made available to newsmen on Wednesday directed its members to return to work.
The News Agency of Nigeria reports that the consultants embarked on an indefinite strike on November 30, 2019 in their bid to press home their demand for improved salary and general working conditions.
Okani thanked Governor Willie Obiano for approving additional money for the running of the institution and care for the welfare of staff of COOUTH.
He also thanked the leadership of Nigerian Medical Association in Anambra State and COOUTH management board for their roles in resolving the industrial impasse.
He said: “The MDCAN hereby suspends her indefinite strike embarked upon on November 30; by this, all our members are by this notice directed to resume work.
“We wish to specially thank our indefatigable Chairman of the NMA, Chief Dr. Emmanuel Monago, for the fatherly role he played towards the resolution of the impasse that led to the MDCAN industrial action.
“We also thank the Board Chairman, Dr. Clement Idigo, for hearkening to the voice of wisdom.
“We salute your nobility, integrity and sagacity.
“Finally, we most respectfully salute His Excellency, Chief Willie Obiano, for his special love for health.”
Okani commended the governor for releasing money and insisting on promotion of all the staff at COOUTH.
He said: “Awka has not had promotion since 2012 until the recent time.
“We say thank you.
“We promise that so long as the signed agreement is deemed sacrosanct by the hospital management, the MDCAN would ensure that her members perform their roles without blemish.”

COVID19: NCDC extends laboratories for diagnosis to six in Nigeria