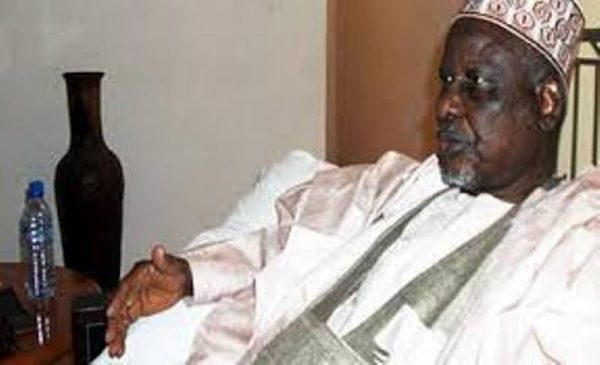 Some eminent Nigerian leaders from across the nation on Friday held a closed door meeting in Lagos on the need to preserve continued unity and peaceful coexistence of the country.
The meeting, which held at the Sheraton Hotel, Ikeja, was chaired by a former Presidential Adviser and founding member of Northern Elders Forum, Alhaji Tanko Yakassai.
The meeting, themed: “National Discourse on Nigeria, Chaos or Community,” was convened by the Nigerian National Summit Group in collaboration with Osigwe Anyiam- Osigwe Foundation and We Care Foundation.
The News Agency of Nigeria reports that those in attendance included leaders of thought from various ethnic nationalities across the country and representatives of some civil society and socio-cultural organisations.
NAN reports that the meeting, which was not open to the media, lasted for several hours until late in the evening.
In attendance were Prof. Pat. Utomi; a former Speaker of House Representatives, Alhaji Ghali Na’abba; Dr. Ferdinand Ikwang; Tony Uranta; Femi Ayo-Adebanjo; Rasaq Oladosu; Charles Anyiam-Osigwe; and Paul Toun.
Others were a former Commissioner for Information in Ogun State, Kayode Samuel; Senator Ewa Henshaw; Dr. Umar Ardo; and Akogun Kola Onadipe.
Also at the meeting were Nkoyo Toyo, Habiba Abiola, Abdul Bako, Barong Tony-Uranta, Ahmed Tijani, Shex Ladipo and Abdul Bako and Wale Ajayi, among others.
In his remark, Yakasai appealed to government to pay greater attention to the progressive views of Nigerians who showed genuine commitment to preserving the unity of the country.
He said: “At this trying moment in the life of our country, every facet of opinion is relevant and important to assist calm the turbulent waves of our existence.
“As one of the founding fathers who actively partook in the political processes leading to the attainment of  independence, our vision was to build a united and egalitarian Nigerian nation where, irrespective of tribe and creed, you can find home wherever you find comfort to live in the country.
“Our forbears lived together peacefully and undertook social economic activities unperturbed in search of livelihood at anywhere in the country.”
Yakassai said that given the observed security challenges the country was facing, particularly the persistent threats from Boko Haram and the defiance with which those in authority interrogated and selectively applied the rule of law, the sense of communal security and unity had wained.
“These make imperative, our focus in today’s meeting: ‘Nigeria Chaos or Community,’” he said.
In his remark, Uranta, Executive Secretary of NNSG, said the meeting was “pro-peace”, aimed at proffering solution to the myriad of challenges in the country.
Uranta said the conveners of the meeting decided to initiate the discourse for selected distinguished Nigerians to fashion out a plausible strategy that could arrest the current slide in Nigeria.
“We are determined to, with your creative inputs and support, further this initiative to galvanise all centrifugal forces to not only pull our country together but cement the pillars of unity founded on core democratic values, equity, fairness and justice,” he said.
Also speaking, Anyiam-Osigwe said as Nigeria approached her 60 years as a nation and with discordant voices from every corner of the nation as to the basis of its corporate existence, the Foundation thought it urgent to initiate a dialogue to confront and proffer workable solutions to douse the palpable tension and forge a peaceful and prosperous country.
He urged the discussants to finds ways of engendering peace in Nigerian communities.
Utomi said there was the need to act fast as the people were already getting tired of the challenges that confronted them daily.
“It should not be talk as usual. The agitations are getting worse everyday. We must act fast and come up with lasting solutions that are implementable and acceptable to all Nigerians,”  Utomi said.
NAN reports that the meeting agreed to set up some committees to fast track implementation of decisions reached while a communique on the outcome of the forum would be issued later.