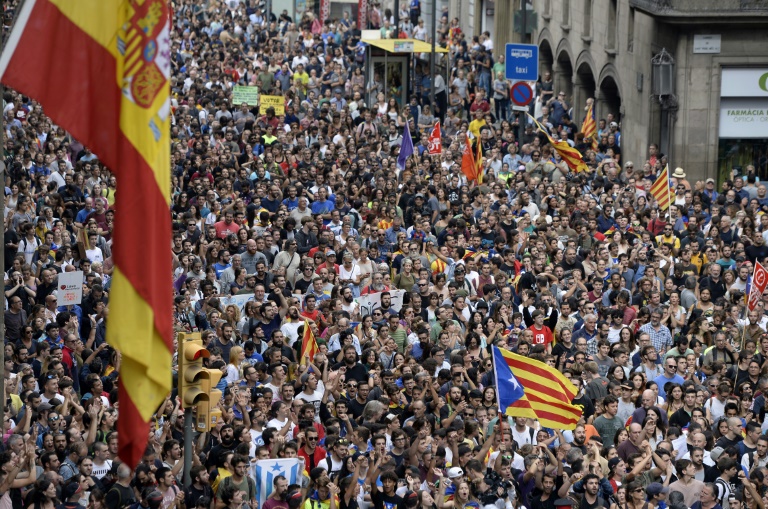 Catalonia’s leader, Carles Puigdemont, only made a symbolic declaration of independence from Spain on Tuesday, based on the votes of 2.3million Catalans.
The real declaration has been deferred.
Instead, the leaders have decided to negotiate with Madrid on the region’s future.
Puigdemont’s speech to the autonomous region’s parliament disappointed thousands of pro-independence supporters gathered outside in hopes of hearing the assembly adopt a unilateral proclamation of independence.
Puigdemont had been under intense pressure from all sides.
The Spanish government had threatened tough action, possibly including imposing direct rule on Catalonia from Madrid, if he had gone ahead with breakaway moves.
Both Spanish Prime Minister Mariano Rajoy’s government and European Council President Donald Tusk had urged Puigdemont not to proclaim independence.
And French President Emmanuel Macron rejected Puigdemont’s call for European Union mediation, saying he was confident Madrid could handle the situation.
Puigdemont’s government has been locked in a confrontation with Madrid since holding a referendum on October 1 that was declared illegal by a Spanish high court.
The Catalan government said 90 per cent of those who voted backed independence but turnout was only 43 per cent as many opponents of independence stayed at home.
Hundreds were injured as Spanish police intervened to close polling stations.
Puigdemont told the Barcelona regional parliament that the result provided a popular mandate for independence.
“I assume … the mandate that Catalonia become an independent state in the form of a republic,” he said to prolonged applause in the assembly, which was tightly guarded by Catalan police.
“I propose suspending the effects of the declaration of independence to undertake talks in the coming weeks without which it is not possible to reach an agreed solution.”
He and other regional politicians later signed a document proclaiming “full sovereignty” for Catalonia, but it was unclear whether the move had any legal value.
“We call on all states and international organizations to recognize the Catalan republic as an independent and sovereign state. We call on the Catalan government to take all necessary measures to make possible and fully effective this declaration of independence and the measures contained in the transition law that founds the republic,” the document read.
The Catalan standoff is Spain’s worst political crisis since an attempted military coup in 1981.
Rajoy’s conservative government planned to decide on next steps over Catalonia at a meeting on Wednesday, and he was in consultations with other parties about how to proceed.