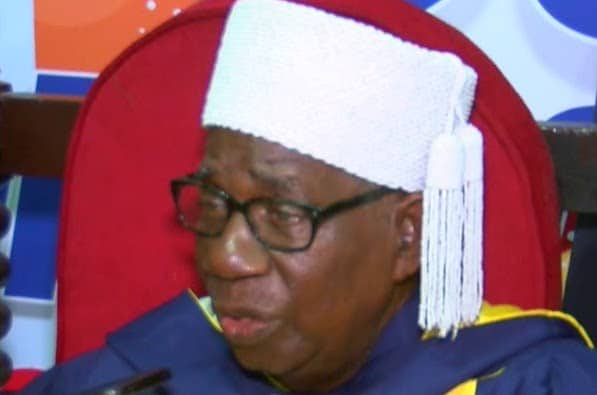 The Lagos State Deputy Governor-Elect, Dr. Obafemi Hamzat, has described his father, Oba Mufutau Olatunji Hamzat, the Olu of Afowora Sogade, Ogun State, as a great man who committed his life to the service of the people.
Oba Hamzat died on Sunday evening.
Dr. Hamzat, who spoke immediately after the news of his father’s death was confirmed, noted that the late traditional ruler served the people of Lagos State meritoriously as a frontline politician in the progressive camp, as an elected member of the State House of Assembly in 1979 on the platform of the Unity Party of Nigeria and as a Commissioner.
The late Oba Hamzat before he became a king in Ogun State few years ago was a frontline politician in Lagos State from the First Republic, where he was a leading member of the Action Group, and the UPN in the Second Republic.
He was a leader in the progressive camp in Lagos with the return of democratic governance in 1999 as a member of the Alliance for Democracy and the All Progressives Congress.
Dr. Hamzat said his father was a devoted family man, a statesman, a committed man of faith who mentored generation of people in different fields of human endeavours until his death.
He said: “I thank God for a life well spent by my father.
“He was a great man who brought up his children with the time honoured values of hardwork, integrity and commitment to service.
“He impacted positively on many lives till his death.
“He played important roles in the politics of Lagos State from the days of Action Group.
“In the Second Republic he was a chieftain of Unity Party of Nigeria and was at the fore-front of progressive politics in Nigeria and Lagos in particular.
“He was called upon to be the king of his community in Ogun State much later in his life.
“He served the community well.
“His reign brought development and progress.
“We will miss him and his father figure role.”