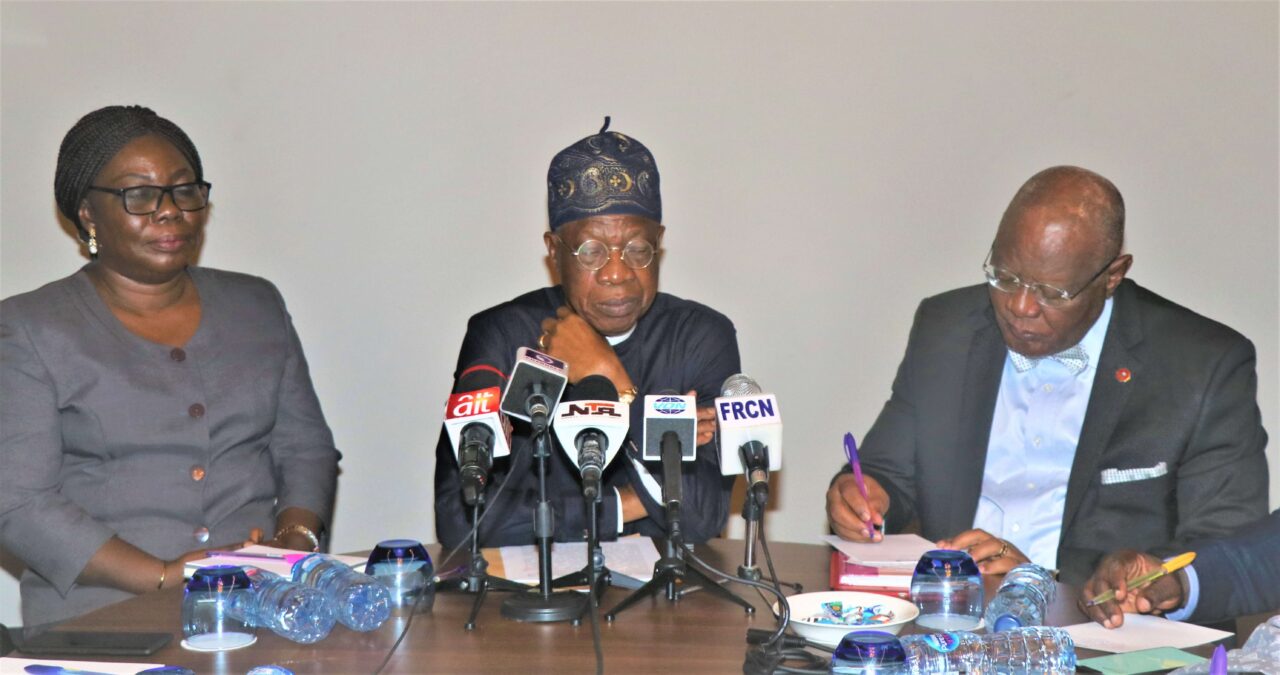 The Minister of Information and Culture, Alhaji Lai Mohammed, has appointed a Task Team of industry experts to design a framework on Audience Measurement System to ensure that content producers and advertisers receive their dues for content and media placement.
The Minister announced the Task Team at a meeting with members of the Association of Advertising Agencies of Nigeria in Lagos on Thursday.
Mohammed said it is imperative to urgently put in place an Industry Framework that will ensure that content producers receive their just due for the value of the content they create, as well as provide objective guarantees to the Advertising community on their Return-On-Investment on media placements.
“This will then have the overall effect of guaranteeing greater spend by the Advertisers, who are all seeking to grow their market share,” Mohammed said.
He said the nation needs an objective and scientific Audience Measurement System that articulates the value of the content to consumers as well as the value of the Audience to Advertisers, particularly in the television and outdoor sectors.
The Minister said due to lack of authentic and real data, the Nigerian media advertising total industry volume has historically performed below the global average benchmark relative to the country’s GDP, when compared with leading global and African markets despite Nigeria’s position as a leading African economy.
He said in 2018, Nigeria’s total advertising revenue performed very poorly (0.12%), when compared with South Africa (0.83%), Kenya (0.35%), Ghana (0.29%) and even Tanzania (0.18%), adding that the lacklustre performance of the advertising industry is attributable directly to a lack of Measurement and Currency of trading, a most basic requirement in all developed markets for the success of the Production industry.
He said: “The current value of the Nigeria television advertising market is estimated at $200 million, despite a population of about 200 million, which translates to $1 per person. In Ghana, its $3 per person, in South Africa, its $18 per person and in Kenya $7 per person. If Nigeria only reaches Ghana’s level of spend, this would triple the size of the TV advertising market to $600 million per annum, which is an extra $400 million par annum. And 90% or more of this increase would go directly to the businesses and the talents creating the content.”
The Minister, who lamented that the value of Nigeria’s Broadcasting Advertising Market is not proportionate to the country’s population, when compared to the top three markets in the Sub-Saharan Africa region, said despite having a population more than three times that of South Africa, Nigeria’s Television Advertising Revenue of $309 million in 2016 was 76 per cent behind that of South Africa ($1.301 million)
He added: “By the end of 2020, the gap between South Africa and Nigeria is projected to marginally decline to 72 per cent. Similarly, in the radio sector, the value of Nigeria’s 2016 advertising revenue of US$81 million was 75 per cent behind its peers, South Africa and Kenya, both at US$343 million.
“In both countries, the value and growth rate of the Broadcasting Advertising Revenue is largely influenced by the availability of a scientific Audience Measurement System that provides confidence to Advertisers in measuring their Return-On-Investment.”
Alhaji Mohammed therefore charged the Task Team to identify best practice Audience Measurement System that will support the sustainable growth of the Nigeria Creative and Entertainment Industry; recommend a Framework for supporting the sustainability of the Audience Measurement System, independent of the Federal Government; and to also recommend a Payment and Disbursement Framework among the key stakeholders in the industry, that is Broadcasting Organizations of Nigeria, Media Independent Practitioners Association of Nigeria and Advertisers Association of Nigeria, that will ensure that system is transparent and rewarding.
Members of the Task Team are Alhaji Garba Bello Kankarofi, a former Registrar of the Advertising Practitioners Council of Nigeria, as Chairman; Obi Asika; Hajia Sa’aa Ibrahim; Mahmoud Ali Balogun; Pauline Ehusani, a representative of the Association of Advertising Agencies of Nigeria; and Joe Mutah as Secretary.
The Task Team will be inaugurated at a date to be announced later.