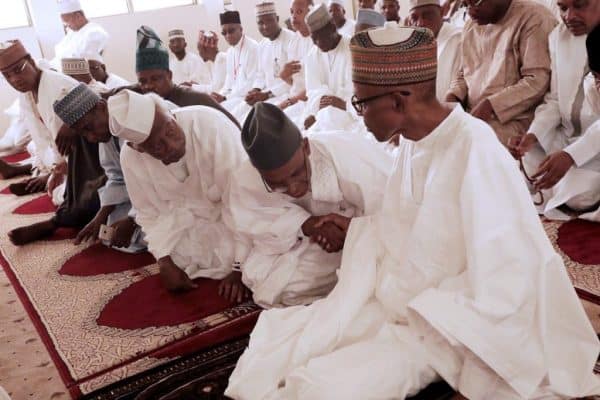 President Muhammadu Buhari on Friday joined hundreds of Muslim faithful on Friday at the National Mosque, Abuja, where special prayers were held for a smooth and successful second term tenure for the president.
The News Agency of Nigeria reports that the two-raka’at prayer was led by the Murshid (General Oversea) of the Mosque, Prof. Shehu Galadanchi.
Galadanchi later offered special prayers for the guidance, protection and prosperity of the country and that of the president as he takes the oath of office on May 29 for his second term.
The Juma’at prayer session was attended by Governor Nasir El-Rufa’i of Kaduna State, cabinet Ministers, service chiefs, Inspector-General of Police, Mohammed Adamu and members of the Diplomatic Corps.
Others who attended the prayer session included religious leaders, some traditional rulers from across the country, private and government functionaries as well as members of the Islamic Shi’ite sect.
The News Agency of Nigeria reports that attempts by the Shi’ite adherents to disrupt the prayer session was quickly checked by security agents, who were stationed at various strategic locations of the Mosque.
The Shi’ite members were calling for the release of their leader, Sheik Ibrahim El-Zak-Zak, who is currently facing criminal charges instituted against him by Kaduna State Government.
NAN reports that special Church services would also be held on Sunday as part of activities for the May 29 inauguration of President Buhari for his second term in office.

After five years of being with a Bishop, Nigeria Catholic Diocese gets one.