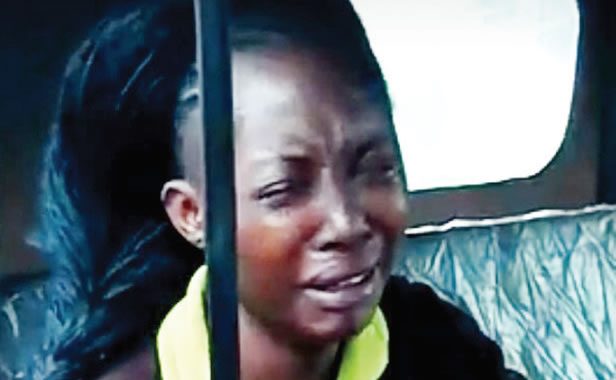 A Lagos State teacher, Abimbola Olamide, has stabbed her husband, Dare Akinbobola, to death while he was battering her in their Ikorodu, Lagos State residence.
According to available information, the incident happened on Wednesday night.
Olamide, 28, who has since been arrested by the police, said in a video clip of her confessional statement in Yoruba language, which went viral on Thursday: “I did not kill my husband intentionally.
“He was beating me and while hitting me, he broke several plates on my head.
“He had battered me many times in the past, but whenever he beats me, I usually run out of the house.
“But this time around, he locked the door to prevent me from escaping, pinned me down and battered me.
“I was helpless.
“I picked up a knife on the ground.
“My intention was to use the knife to scare him away.
“So, I held on to the knife, but he didn’t leave me alone.
“I mistakenly stabbed him.
“I couldn’t have killed my husband intentionally.
“My family already told me to leave him, but I did not because he was the husband of my youth and father of my two children.
“He usually beats me.
“You can ask around.
“Everybody knows.
“But I have just been enduring it.”
The spokesman of the Lagos State Police Command, SP Chike Oti, confirmed the incident.
Oti said: “It is another case of spousal killing in which the suspect stabbed her husband in the neck and the man bled to death.
“The corpse has been recovered for autopsy.
“Meanwhile, the suspect has been arrested and taken to the SCIID, Yaba for further investigation.”