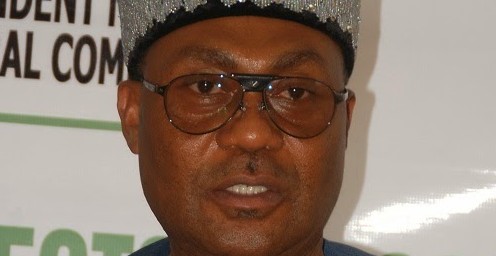 Share
Facebook Twitter LinkedIn Pinterest Email
The Rivers State Chapter of the All Progressives Congress says it welcomes the judgement of the state Governorship Election Petitions Tribunal, which on Saturday in Abuja annulled the declaration of Nyesom Wike of the Peoples Democratic Party as the winner of the April 11, 2015 governorship poll in the state.
The APC said it won and had been vindicated.
The Rivers APC said in a statement issued in Port Harcourt and signed by its Chairman, Dr. Davies Ibiamu Ikanya, immediately after the Tribunal judgement: “We have been vindicated in our persistent claim that the election in Rivers State was a sham and that the Independent National Electoral Commission erred in declaring Wike governor. We repeat that there is no way under the heavens that Chief Wike can beat our candidate, Dr. Dakuku Peterside, in a free and fair election.”
The statement reads in full: “Though, we were expecting total ban of Chief Nyesom Wike from further participation in the politics of Nigeria seeing the orchestration of the number of death of Rivers State people in order for him to be installed as a Care-Taker Governor all thesame we thank the Justice Mohammed Ambrusa-led Tribunal for restoring hope to the downtrodden people of Rivers State who have borne the brunt of Wike’s illegal and visionless administration in the past five months. “We thank the Tribunal for allowing itself to be used by God to uproot the impostor governor, Chief Nyesom Wike, who has these past five months brought monumental suffering to our people in cahoots with some mischievous and misguided politicians whose only understanding of governance is blackmailing and the looting of our common patrimony.”
The APC lamented that “Wike’s tragic entry into the Brick House seat of power has only succeeded to bring back criminality in various forms in the once peaceful Rivers State as kidnapping, robbery and organised crimes have being on the increase since his evil arrival.
“For the first time in the history of our dear State, a government without any vision or blueprint assumed office, thereby collapsing all the systems of governance. On 22nd October, 2015, 19 students on the scholarship of the Rivers State Government through its agency, the Rivers State Sustainable Development Agency (RSSDA) were forced to abandon their studies and return to Nigeria because the State Government had not paid their fees and upkeep in the United Kingdom. Those in Canada and other locations are also expected to return soon for same reasons.
“Earlier this week, the RSUST Chapter of the Senior Staff Association of Nigerian Universities (SSANU) went on a protest march and warning strike due to the mindless hiking of fees of the university’s primary and secondary demonstration schools by the clueless Wike administration. Local Government Councils in the State have been unable to pay their staff salaries for August and September while some, such as Opobo/Nkoro, owe their personnel salaries from July 2015 to date.
“In the area of sports, our twin pride Sharks and Dolphins may be relegated from the Nigerian Premier League for the first time in so many years. While Wike was busy looting and wasting Rivers State resources in pursuit of his failed project to destroy his benefactor, Rt. Hon. Chibuike Rotimi Amaechi, he abandoned governance and now that he has been sent packing, he should summon courage and face the wrath of the law by accounting for the death of our people killed to install him as Care-Taker Governor.
“Rivers APC appealed to the relevant security agencies “to keep close watch on Chief Wike as we are reliably informed that he is planning to run away from facing the wrath of the law for his corrupt practices and for supervising the death of over 100 APC members just because of election. Anything short of this will keep the souls of our people restless.”
Davies Ikanya Governorship poll
Share. Facebook Twitter Pinterest LinkedIn Tumblr Telegram Email