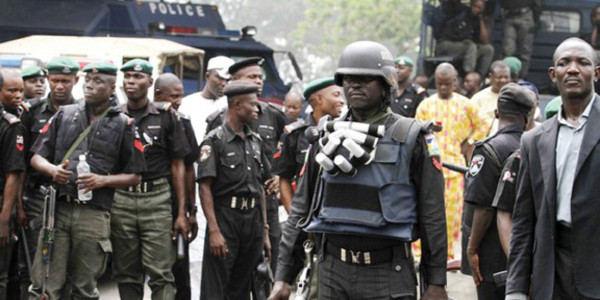 Share
Facebook Twitter LinkedIn Pinterest Email
Four persons were feared killed and many others injured after suspected cult groups clashed at the Oyingbo Bus Stop area of Lagos State on Wednesday with the police.
The clash between Eiye and Aye snowballed after frightened community members alerted the policemen who raced to the scene.
Rather than bolt when the clashing cult members saw the policemen, they suddenly teamed up and attacked the police.
According to eyewitnesses, when the police realised that the cultists meant to kill them, they went on the offensive.
In the course of the exchange of the gunfire, four persons were said to have been hit by flying bullets.
While some residents said that the four injured men died, another set insisted that only one person died, while three others were injured and rushed to the hospital.
The four persons that were hit by the bullets were passers-bye.
The suspected cultists, about 15 in number, stormed the area around 9.30pm, shooting intermittently to scare shop owners and pedestrians.
They were said to have been led by a man known as Small Rainbow.
It was gathered that the cultists had fomented trouble at old Apapa Road in the afternoon, before retiring in the area in the evening time.
When our correspondent visited the area on Thursday, it was learnt that one of the deceased, Musa Garba, was a northerner, who worked as a truck driver inside the Kanuri Motor Park in Oyingbo.
It was also gathered that the late Garba was shot on the left side of his neck.
Policemen from the Iponri Police Station, earlier in the morning, came to remove the corpses of those who were killed.
A resident, who spoke on the condition of anonymity, said that the cult groups had been fighting since Monday, describing it as a “supremacy battle”.
A resident added: “This is not the first time rival cult groups would engaged one another in Oyingbo. Whenever it happens, we always called on the policemen to come to our rescue.
“When the cult members saw the policemen, they opened fire on them.
“The fight lasted for hours.
“After the dust settled, we discovered that one person was killed, while three others sustained injury from the stray bullets.”
The Police Public Relations Officer for the Lagos State Command, DSP Kenneth Nwosu, while confirming the incident, said three suspected cultists had been arrested by the police in connection to the act.
Cult clash Policemen
Share. Facebook Twitter Pinterest LinkedIn Tumblr Email