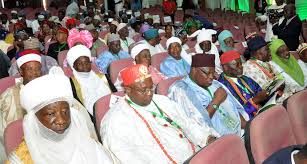 In order to avert crisis at the ongoing National Conference over derivation, the leadership adjourned sitting abruptly on Tuesday on the contentious derivation principle in order to consult with the leaders of each geopolitical zone later in the night.
The meeting is schedule for Tuesday night in Abuja.
General Ike Nwachukwu (rtd) informed delegates that zonal leaders met on Monday night in order to resolve the issue of derivation through consensus but the leaders were unable to conclude on the issue.
Nwachukwu however implored the delegates to allow the group continue deliberation and report back on the consensus reached on Wednesday.
A former Minority Leader of the House of Representatives, Hon. Mohammed Kumaila, who seconded the motion moved by Nwachukwu, pleaded with delegates to give zonal leaders till Wednesday to resolve the issue.
When the Chairman of the Conference, Justice Idris Kutigi, put the question, Conference delegates unanimously agreed to adjourn sitting till Wednesday so as to allow the zonal leaders reach a consensus on the issue and then give them a feedback.
It could be recalled that delegates from the North and the South on Monday sang discordant tunes over whether to increase or not the 13 per cent derivation.
While most delegates from the South, particularly the South South and South East, said derivation should be increased from the present 13 per cent to between 21.5 per cent and 50 per cent, others said it should be reduced further.