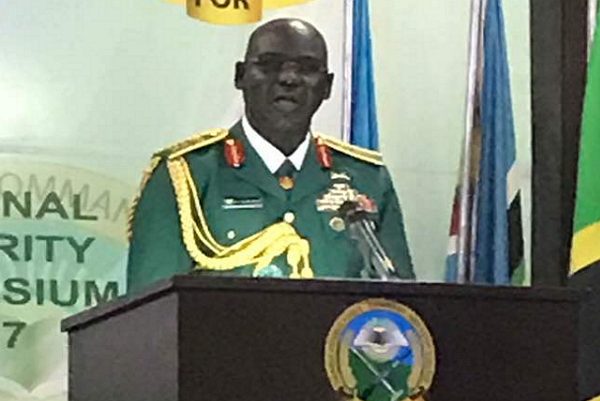 Share
Facebook Twitter LinkedIn Pinterest Email
The Chief of Army Staff, Lieutenant General Tukur Buratai, has been conferred with an “Award of Excellence” for his contributions to sustainable peace in Nigeria and Africa.
The award was bestowed on him by the Association of African Journalists and Broadcasters in Accra, Ghana.
Speaking at the pan-African Distinguished Achievers Award ceremony, Buratai called on African journalists to be cautious while using the social media, especially on issues bothering on security.
A copy of the chief of army staff’s speech was made available to newsmen in Abuja.
Represented by Major General Nuhu Angbazo, the Chief of Civil Military Affairs, the army chief urged journalists to only report facts and not encourage hate, extremism and violence in their reportage.
He also advised them be objective and constructive while reporting events in the fight against terrorism on the continent.
According to Buratai, the security of Africa is a collective responsibility.
Buratai assured that the effort to end terrorism in the continent and make it safe would be sustained until victory was achieved and called on journalists to partner with the security agencies in that regard.
On the award, the chief of army staff expressed happiness that his “modest efforts” to re-position the Nigerian Army to a professionally responsive force and fight against insurgency had been noticed.
He added that the fight against insurgency and all forms of criminality had yielded results.
He, however, said the successes recorded so far would not have been possible if not for the support of President Muhammadu Buhari and the media, among others.
Earlier, Baba Ransome, a member of the association and Deputy Country Coordinator for Nigeria, said the award was conferred on Buratai for his ability to bring the insurgency in the Northeastern Nigeria under control.
Ransome commended the army chief for “his strategic cooperation with other African nations in the fight against insurgency”.
Accra Association of African Journalists and Broadcasters Award of Excellence Chief of Army Staff Lieutenant General Tukur Buratai Major General Nuhu Angbazo
Share. Facebook Twitter Pinterest LinkedIn Tumblr Telegram Email