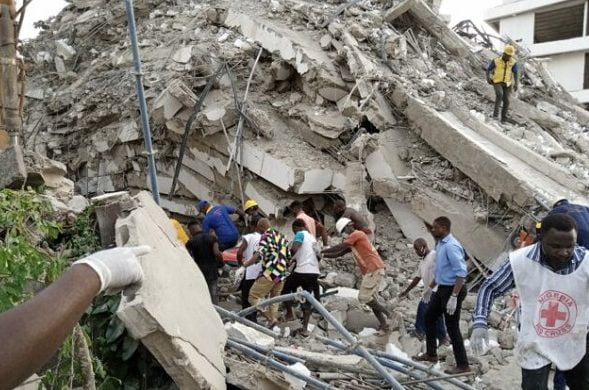 Dr. Phillip Idaewor,  APC Diaspora presidential hopeful,  has commiserated with  families of victims of building that collapsed in  Ikoyi and the Lagos State government, urging Nigerians to support them.

Idaewor, also  Chairman,  Forum of APC Diaspora Chairmen and  APC UK, prayed God to grant families of  victims that died from the  disaster the  strength, comfort and grace to bear the loss.

He also prayed God to grant the victims eternal rest.

The News Agency of Nigeria recalls that the Lagos state Governor, Babajide Sanwo-Olu on Saturday, said the number of survivors of the collapsed 21-storey building in Ikoyi, had risen to 15 while the deaths recorded so far, was 42.

The 21 storey building under construction collapsed on Monday, Nov. 2.

Idaewor in a statement on Sunday in Lagos, said what was most needed now was to console families of victims and give them the much needed space to mourn such catastrophic losses.

“Many Nigerian lives have been lost in this disaster. It is not time to jump to conclusions and apportion blames. The affected families should be allowed to mourn while the state handles the investigative part of the disaster later.

“Even a single life of any Nigerian counts. We have to be cautious and sensitive in reacting to incidents of death.

“It is also not an easy time for the Lagos state government.”

Idaewor, therefore, urged residents of the state to give the government all the support needed to ensure that necessary measures were put in place to minimise such occurrences in future.

The presidential hopeful also urged the media to refrain from unsubstantiated reports that might  further hurt the feelings of families affected by the disaster.

He, however, urged the state and its relevant agencies to ensure that full judicial and Engineering/technical investigations were carried out speedily and the findings made public.

Idaewor also urged builders to ensure that guidelines on construction were followed to the letters to forestall similar occurrences.

“This incident offers a real opportunity to update regulatory legislation, and also to establish comprehensive Health and Safety commission that will enforce regulations in all working premises in the state and indeed across the country.

“I urge the Lagos state government to ensure that families of victims of this disaster get the full insurance compensation payments expected to be in place for such projects.

“This is a most important soothing balm to help the families of victims,” he added.