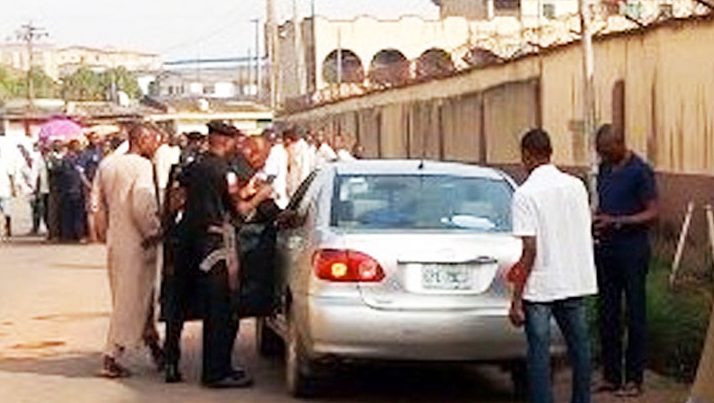 The family of Lukmon Olowu, who was found dead inside his Toyota Corolla car on Sunday behind the Nigerian Institute of Journalism in Ogba area of Lagos State, has said there was no way he could be the lover of the lady found dead with him, Promise, who is also married.
Lukmon, 39, married with two kids, was a licensing agent.
According to the family, Lukmon couldn’t have been making love to the woman inside his car.
Promise was said to be from Cross River State, while her husband, Clement, a commercial bus driver, is from Edo State.
She had a child for Clement.
Lukmon’s family members, who gathered on Monday at their family house at 56, Shonola Street, Ogba, Lagos, said their son was murdered.
Contrary to earlier stories that Promise and Lukmon lived in the same compound, New Telegraph’s visit on Monday to Ogba proved that Promise lived at 48, Shonola Street, while Lukmon lived in Iju-Ishaga area of Lagos State.
Lukmon’s younger brother, Idris Olowu, said Lukmon was not into any relationship with Promise.
Idris said: “On Saturday evening, Lukmon and about six of his friends went to a birthday party at Obawole, Iju area.
“After the party, Lukmon used his car to drive many of his friends to their residences, including Promise.
“She also attended the birthday.
“Promise later called and pleaded with Lukmon to take her to her friend’s place around Excellence Hotel, located at Ogba.
“We understand that she called her husband, telling him that she would spend the night at her friend’s place before she called and asked Lukmon to drive her there.
“The next thing we heard was that police called us that our brother was dead, that they had found Promise and Lukmon dead inside his car.
“We heard they were found naked.
“We all went to the police station to confirm the information.
“Before the police drove the car to the station, they took pictures of their dead bodies.
“We saw a picture of our brother, naked, and his two legs raised and placed on the dashboard, while the dead woman was half naked.
“She was sitting beside him at the front seat.
“Her head rested lifelessly on the car seat headrest.
“I can swear with my life that my brother didn’t have anything to do with Promise.
“He was a responsible man, married with children.
“He didn’t take alcohol.
“I learnt that woman was dating a guy called Femi.”
Femi is said to be a DJ and is popularly known as Finest.
Continuing, Idris said: “Promise’s husband, Clement, had warned the guy several times to stay away from his wife.
“Even when the incident happened, the same Femi came to tell us that the trap was meant for him.”
Idris further disclosed that Promise lived close to a beer parlour.
It was alleged that many people knew the late woman.
Idris further said: “She called her husband that night that she would spend the night at a friend’s place.
“It was not the first time Lukmon had used his car to convey Promise and other people to different places after parties.
“The woman always goes to parties with youths living in the area because she was a friendly type.”
Idris recalled that when they got to the police station on Sunday, Promise’s husband, Clement, said the dead person should have been Femi and not Lukmon.
Idris said: “To my surprise, when we got to Area G Police Command, Promise’s husband said that he thought it was Femi that died.
“Even Femi’s phone was brought out from Promise’s handbag by her husband.”
When our correspondent visited Promise’s house on Monday evening, some of her neighbours said she had no job, but frequents the beer parlour where she drinks.
One of the residents, who does not want her name mentioned, said: “The death of the woman came to every one of us as a surprise.
“Promise had a child and had a friend at the beer parlour joint.
“She used to stay at that club with her friend, drinking, whenever her husband was not around.
“It was at this club that some men, including the one that died with her, met her.
“There was a day I warned her to stop going to the beer parlour because I had seen a situation where some of the men that came to the joint would harass women.
“That was why I warned her to stay away from the place to avoid what eventually happened now.”
When our correspondent approached Clement, who wore a T-Shirt and brown trousers, he snapped: “No! No! I can’t talk for now.”
He crossed to the other side of the road and disappeared.
People in the area said the house he entered is his grandmother’s apartment.
Attempts to speak with Femi failed too.
When his phone was called, he picked and when our correspondent told him the reason for calling, he cut off and switched off.
The Lagos State Police Public Relations Officer, Olarinde Famous-Cole, said the police were carrying out intensive investigations to know the circumstances surrounding the death of the couple.
Famous-Cole added: “We got to know about this incident barely 24 hours ago.
“We are still investigating. We have to carry out autopsy to ascertain the cause of their death.”
. New Telegraph.