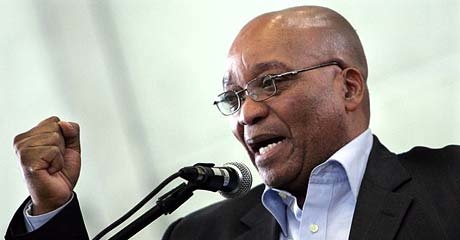 South Africa’s parliament will hold a vote of no confidence in President Jacob Zuma on Thursday, the governing ANC party said on Wednesday.
“We will possibly elect a new president on Thursday if not Friday,” ANC treasurer general, Paul Mashatile, told journalists, assuming scandal-hit Zuma will lose the vote.
Mashatile said: “We want certainty.
“We would like the incoming president [to hold the postponed State of the Nation address] without delay.”
The vote of no confidence, requested by opposition party Economic Freedom Fighters, had initially been scheduled for February 22.
The ANC caucus in parliament decided to move the vote forward after it formally asked Zuma to resign on Tuesday.
Finance Minister, Malusi Gigaba, said that Zuma would speak at 0800 GMT and satellite trucks were in position at Pretoria’s Union Buildings, the seat of the country’s government.
Zuma’s office said there was no “official communication” of any impending address but urged media to wait.
The Secretary-General of South Africa’s ANC said Zuma did not threaten to challenge his removal by the party in court, as speculated by local media.
Ace Magashule, the sribe of the ANC, had told a news conference that Zuma would respond by Wednesday on the decision to “recall” him.
Magashule said: “President Jacob Zuma has behaved like a leader of the ANC.
“He has never threatened us with any court action, not at all.
“He did in fact confirm that he would respond by tomorrow.”
The ANC ordered Zuma to step down as head of state after marathon talks over the fate of a leader whose scandal-plagued years in power darkened and divided Nelson Mandela’s post-apartheid ‘Rainbow Nation’.
Leading members of the ANC want new party leader, Cyril Ramaphosa, to replace Zuma as president, Magashule told a news conference.
The party’s national executive was split on precisely when Zuma should go, Magashule added, leaving the president’s immediate fate still hanging in the balance.
Zuma has been living on borrowed time since Ramaphosa, a union leader once tipped as Mandela’s pick to take over the reins, was elected as head of the 106-year-old ANC in December, narrowly defeating Zuma’s ex-wife, Nkosazana Dlamini-Zuma.
In spite of the damning decision to order Zuma’s “recall” ANC-speak for ‘remove from office’ domestic media have speculated that the 75-year-old might yet defy the party’s wishes, forcing it into the indignity of having to unseat him in parliament.
Shortly before midnight, the SABC state broadcaster said Zuma had been told in person by Ramaphosa that he had 48 hours to resign.
A senior party source later told Reuters Zuma had made clear that he was going nowhere.
“Ramaphosa went to speak with him,” the source said, adding that when Ramaphosa returned to the ANC meeting in a Pretoria hotel, the discussions were tense and difficult”.
The source added: “We decided to recall Zuma. He hasn’t been told yet.”
On Friday his wife Tobeka Madiba-Zuma posted comments on Instagram suggesting Zuma, who has challenged and defied attempts by the ANC and courts to rein him in, was prepared to fight and believed he was the victim of a Western conspiracy.
Madiba-Zuma said: “He will finish what he started because he does not take orders beyond the Atlantic Ocean.”
South Africa’s economy, the most sophisticated on the continent, has stagnated under Zuma’s nine-year tenure, with banks and mining firms reluctant to invest because of policy uncertainty and rampant corruption.
So far there has been silence from Zuma in response to Tuesday’s ANC order, suggesting a power struggle behind the scenes with new party leader, Cyril Ramaphosa.
Besides his controversial relationship with the influential Guptas family, Zuma has 783 counts of corruption outstanding against him relating to a multi-billion dollar state arms deal in the late 1990s.
Zuma’s spokesman could not be reached for comment on Wednesday.
ANC spokesman, Pule Mabe, told state broadcaster SABC that Zuma remained “a disciplined member of the ANC and would do what is best for a cadre of the movement”.
Besides the pressure from the ANC, Zuma is facing a no-confidence motion in parliament brought by the opposition Economic Freedom Fighters and set for February 22.
The ANC could throw its weight behind such a vote if Zuma, who has survived several no-confidence motions in the past, refused to resign.