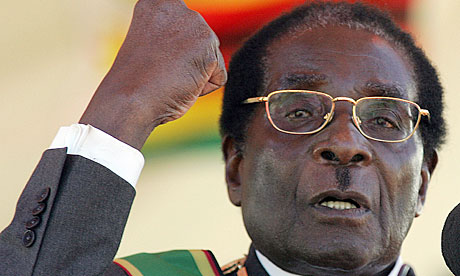 Zimbabwe’s President Robert Mugabe has left the country for medical checks in Singapore, the government said in a statement, about two months after his previous such trip to the south Asian nation.
Aged 93, Mugabe is the only leader the southern African country has known since independence in 1980, and his health is a hot topic ahead of a presidential election scheduled for next year that he is due to contest.
He flew to Singapore late on Monday.
The Ministry of Information said he was expected to return home at the weekend.
Mugabe now struggles to walk, with security aides forming a human shield around him in public, often making it difficult for reporters to film or take pictures of him.
On May 4 at a World Economic Forum Summit in South Africa, Mugabe sat slumped in his chair, wringing his hands, as he told a panel discussion in a low murmur that his country was not a “fragile state”.
Critics say his infirmities make him unfit to hold office but he continues to exercise tight control over his ZANU-PF party.
In February he said the party and Zimbabwe’s people saw no viable alternative candidate to him for 2018 elections.
NAN reports that on February 17, Mugabe’s wife Grace warned those aspiring to take over from her husband that there is no vacancy at the state house before God ordains his husband’s retirement.
Speaking at a rally in Buhera North, Manicaland Province, the first lady lashed out at perceived factionalists and ‘successionists’ in the ruling Zanu-PF party, who were bent on toppling her 93-year-old husband.
Mugabe’s tenure as party leader ends in 2019, but the party in 2014 had endorsed him as its presidential candidate for the 2018 elections.
“Whoever is engaging in factionalism must stop forthwith, stop it,’’ she bellowed to thousands of people that included school children.
Vice-President Emmerson Mnangagwa is seen as the face of “successionist’’ politics but he has since denied harboring ambitions to take over from Mugabe before his tenure ends.
The first lady challenged the “successionists’’ to self-introspect to determine whether they possess leadership qualities and are able to emulate her husband.
She added that her husband was irreplaceable and even if he contested the election as a corpse the people would vote for him.
NAN.