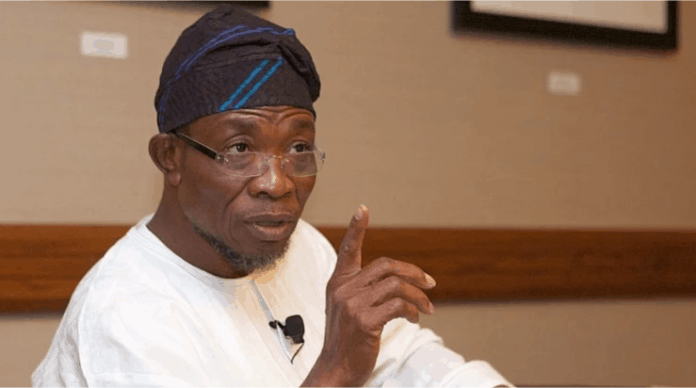 The Minister of Interior, Ogbeni Rauf Aregbesola, has offered reasons why it took the Federal Government 18 months to reciprocate the visa overture made to it by the United States of America.
Aregbesola’s explanation, which came with an order to the Comptroller-General of the Nigeria Immigration Service, Muhammad Babandede, to implement the decrease in Nigeria’s Visa charges to Americans with effect from August 29, 2019, followed a hike in visa fees for Nigerians by the US.
The US had on Wednesday hiked the cost of its visa fee for Nigerians worldwide, saying Nigeria had failed to respond to its overtures in the last 18 months for negotiation for a downward review of the fees Americans paid for Nigerian visas.
In the statement by it Embassy in Nigeria, the United States of America said: “Since early 2018, the U.S. government has engaged the Nigerian government to request that the Nigerian government change the fees charged to U.S. citizens for certain visa categories. After eighteen months of review and consultations, the government of Nigeria has not changed its fee structure for U.S. citizen visa applicants, requiring the U.S. Department of State to enact new reciprocity fees in accordance with our visa laws.
“The reciprocity fee will be required for all Nigerian citizens worldwide, regardless of where they are applying for a nonimmigrant visa to the United States. The reciprocity fee is required for each visa that is issued, which means both adults and minors whose visa applications are approved will be charged the reciprocity fee. The fee can only be paid at the U.S. Embassy or the U.S. Consulate General. The reciprocity fee cannot be paid at banks or any other location.”
However, Aregbesola in the statement signed on his behalf by the Director of Press and Public Relations of the Ministry, Mohammed Manga, said the delay in reciprocating the gesture by the United States was caused by the transition in the Ministry despite the fact that the Americans said the talk over it started in early 2018.
The last set of Ministers that served in the Muhammadu Buhari Administration left office in the last week of May 2019, while new ones, including Aregbesola, were sworn in last week.
But Aregbesola said in the statement: “The attention of the Ministry of Interior has been drawn to the introduction of reciprocity of Visa Fees by the United States of America. The Ministry acknowledges that there were engagements with the United States Embassy on the issue and in the aftermath, a Committee was set up to conduct due diligence in line with the Ministry’s extant policy on reciprocity of Visa fees. The Committee had concluded its assignment and submitted a Report but the issuance of authorisation for its recommendations was delayed due to transition processes in the Ministry at the policy level.
“The Honourable Minister of Interior, Ogbeni Rauf Aregbesola has approved the decrease of Visa charges payable by US citizens in line with reciprocity policy as recommended by the Committee.
“Accordingly, the Comptroller-General of Nigeria Immigration Service (NIS), Muhammad Babandede, has been directed to implement the decrease in Nigeria’s Visa charges to US Citizens with effect from Thursday, 29th August, 2019.”