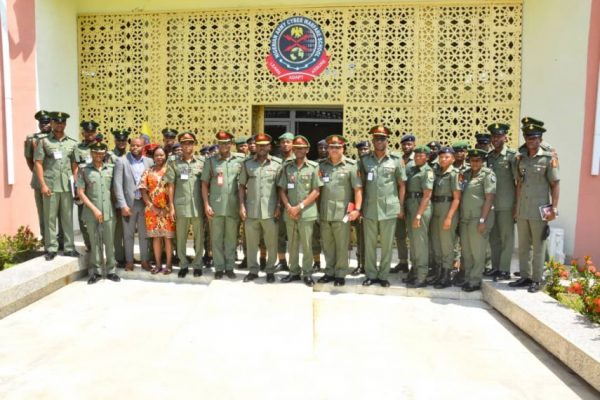 The Chief of Army Staff, Lieutenant General Faruk Yahaya, says wars are no longer fought only on land, sea or air as criminals have also extended their nefarious activities to the cyberspace.

He said the development had sprung up the need to properly defend the territorial integrity of the nation on the cyberspace, hence the need to establish the Nigerian Army Cyber Warfare Command.

According to him, NACWC and other cyber affiliated formations are established to combat cyber threats and cybercrimes within the Nigerian Army sphere of influence.

Yahaya added: “However, the need for manpower to be properly trained and to acquire specialisations in key aspects of cybersecurity becomes paramount.

“To this end, NACWS among other roles, was established to provide specialist training for cyber warriors, aimed at inducting trained cybersecurity specialists to the NACWC and other cyber affiliated formations in support of army operations.

“A number of courses has been proposed towards achieving the schools training objectives.

“Consequently, I approved the conduct of the Digital Literacy and Core Computing Certification Course as the maiden programme in the school.”

The COAS said the course was designed to equip the participants with basic computer competences required to manipulate current and future Information Communication Technology infrastructure.

He said the nation’s security dynamics implied that effort must be doubled and provide the Nigerian Armed Forces the needed cyber products and competences to defeat the multiple threats confronting the country.

Yahaya added that the Army personnel must remain resolute and patriotic by positively contributing to the task of nation building to justify the huge investment by the Federal Government.

He urged the participants to pay full attention and participate effectively during the course.

According to him, NACWS Basic Laboratory is a critical addition to the training needs of the school and would no doubt help foster real-time training of cyber warriors for the Nigerian Army.

Yahaya said: “Maximum cooperation is therefore needed from instructors, administrative staff and students to place the school at the very top of cybersecurity development in Nigeria.

“I charge you all to put this facility to good use knowing that the country currently has several competing demands for limited resources.”

Earlier, Adetoba said the course was the first of its kind targeted at developing the capacity and improve skills of army personnel on cyber related activities.

Adetoba said the NACWS was the latest effort by the leadership of Nigerian Army to develop competences in the cyber domain, adding that cyber threat was a potent threat to the country.

According to him, government and private individual as well as criminal elements and terrorist use the cyber space for legitimate and illegal activities respectively.

He said the challenges in the North East, North West, North Central, South West and Niger Delta suggested that contemporary security challenges and methods of curbing them had transcended the traditional methods.

This, according to him, presupposes that army personnel needed to be rightly trained and equipped to support military operations and other security agencies in curbing various cyber related threats bedevilling the country.

The commandant said the command and the school were established to combat cyber threats/attacks and ensuring the efficient security of the nation’s cyber space.

He said the school had the mandate to provide the Nigerian Army with highly skilled, proficient and innovative cyber warriors capable of operating in a single and joint environment.

Adetoba noted that the IC3 course had a total of 30 students drawn from various units within Abuja, adding that it was a global benchmark for basic computer literacy and specialist certification.

He implored the participants to take the course seriously so as to imbibe the knowledge and skills that would improve their performances in their formations and units towards the overall protection of army’s cybersecurity landscape.