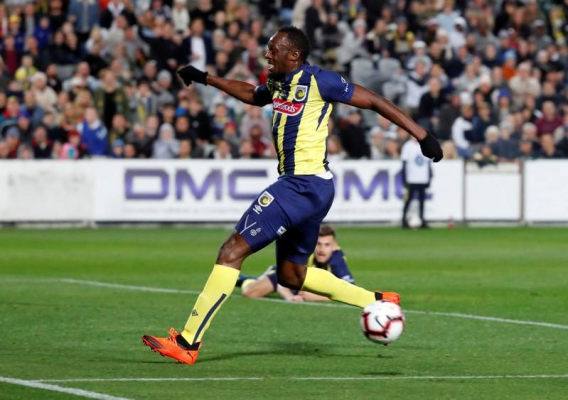 Olympic sprint king Usain Bolt has named Gareth Bale as one of three footballers he would pick to run with in a 4x100m relay race.
The record-breaking 100m and 200m star took to professional football last year in the Aussie A-League.
And asked which players could be effective at his own sport, he said he would choose the Welshman alongside some other superstars in the game.
In a question-and-answer session with Fifa.com, Bolt revealed that PSG and France star Kylian Mbappe would be his first pick.
The striker broke onto the scene with some sensational performances for Monaco, with his lightning pace a key feature of his game.
Cristiano Ronaldo was next, and despite the world legend’s age of 34, Bolt selected him alongside youngster Mbappe.
And for his third pick, Bolt went with Bale, whose long stride and athletic physique have seen him embarrass defenders across Europe.
The Wales star really announced himself to the world stage when he toyed with Inter Milan right-back Maicon in the Champions League in 2010.
Bolt tried his luck at football last year when he joined A-League side Central Coast Mariners.
It didn’t quite work out the way he wished, though.
He said: “I don’t want to say it wasn’t dealt with properly, but I think we went about it not the way we should, and you learn your lesson, you live and you learn.
“It was a good experience. I really enjoyed just being in a team and it was different from track and field and it was fun while it lasted.”