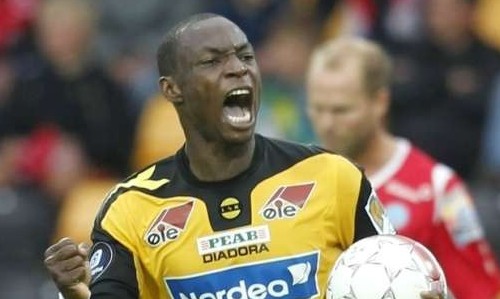 Striker, Antony Ujah failed to come to the party as his Cologne side drew goalless with Borussia Monchengladbach in a Bundesliga clash on Sunday.
The Nigerian striker starred for the entire 90 minutes of the the first Rhine area derby of the season with the game failing to live up to the pre-match expectations.
It was the game fans of both sides were looking forward to the most following Cologne’s promotion back to the top flight, but the fear of losing outweighed the desire to win as a goalless draw was produced.
The hosts had the best chance of the game in the first half, but it was wasted by Pawel Olkowski.
Both sides at least could take heart from a result which extends their respective unbeaten starts to the season with one win and three draws for both Rhineland rivals.
50,000 fans packed in to the Mungersdorferstadion full of anticipation for a game which electrifies a whole region.
There was no such electricity on the field, however, with the number of chances able to be counted on one hand.
The best of those came in the 17th minute when Olkowski was put through on goal, but he perhaps had too much time to think what he actually wanted to do and, in the end, contrived to shoot into the side-netting with Yann Sommer getting a hand to it.
Gladbach seemed to have forgotten about their usual counter-attacking football and instead were happy not to let Cologne advance too far.
The hosts, for their part, struggled to create any real danger when going forwards, resulting in a midfield battle which failed to capture the imagination.
As time wore on, Gladbach coach Lucien Favre decided to take a gamble by sending Patrick Herrmann and Branimir Hrgota on.
Although the former pushed his weight around and tried to be inventive, he only had seven minutes to make an impact, and he failed.
The final whistle was met by subdued applause from fans who reflected the feelings of those on the field – at least they had not lost to their local rivals.