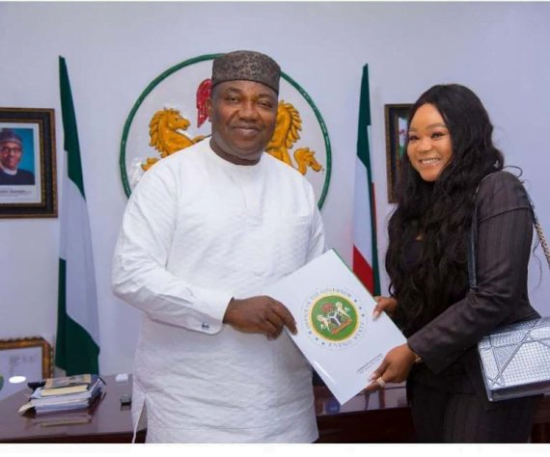 Ifeanyi Ugwuanyi, Enugu State Governor, has appointed Nollywood actress Reaheal Okonkwo, as Enugu State Ambassador on Youth Development.
The beautiful famous actress announced the good news via her Instagram page, where she shared a photo of herself and the governor holding what appeared to be her appointment letter.
“I am overwhelmed and glad to inform you that I have been appointed the Enugu State Ambassador on Youth Development by the state governor, His Excellency IFEANYI LAWRENCE UGWUANYI.
“I am humbled that my state found me worthy to represent them and I promise to do my utmost best towards creating positive impact in the lives of Youths and the people of Enugu State at large.
Okonkwo, who is popularly known as Nkoli Nwa Nsukka is a fast rising Nollywood actress, model, singer, dancer and a philanthropist.
In 2007, Rachael Okonkwo joined the Nigerian movie industry (Nollywood) professionally, after registering with the Actors Guild of Nigeria Enugu Chapter, and started attending movie auditions and featuring as minor character in movies.
In 2008, she played a supporting role in the movie “Royal War” alongside Ini Edo and Van Vickers.
Also in 2010, she played a supporting role in the movie “Open and Close”, alongside Nuela Njibuigbo, Patience Ozokwor, John Okafor and Charles Inojie.
In 2014, the renowned dancer rose to fame after playing the lead role in the Nollywood blockbuster movie “Nkoli Nwa Nsukka”, an Igbo indigenous movie produced and directed by Mac Collins Chidebe.
Rachael Okonkwo has acted in more than 100 Nollywood movies which include Royal War, Ekaette Goes to School, White Ladies, Sister Esther, Paw Paw the Guitar Boy, Bloody War, Ogidi, Teri Teri, Arthur One Eye, Onwa Na South.
Others are Left Over, Zee World Madness, University Girls, Vale of Tears, Ojawa-Nwa, Justify My Love, Eno My Calabar Love, Ijele the Princess of Fire, Local Prostitute, Please Leave My Husband, Tears of Betrayal, The Gods Anger, among others.
In 2014, the model and songwriter won the Best Indigenous Comedy Actress at the City People Entertainment Awards.
In 2016, she was nominated for Best Comedy Actress of the Year at the African Magic Viewers Choice Awards for her role as Nkoli in the movie “Nkoli Nwa Nsukka”.
The beautiful and talented actress, recently debunked rumours that she was dating Nollywood movie producer and director, Mac Collins Chidebe, and Nollywood famous actor Ken Erics during an interview.
Okonkwo, who is also a philanthropist, has a special way of giving back to the society.
According to her, she hosts an annual carnival, which aims at providing free gifts for kids and entertainment to the people.
She said the project enables her to interact with her fans.
In 2015, she hosted the first edition of the children’s Easter Carnival, which aimed at giving free gifts to kids during the Easter celebration and was held in Enugu coal city of Enugu State.