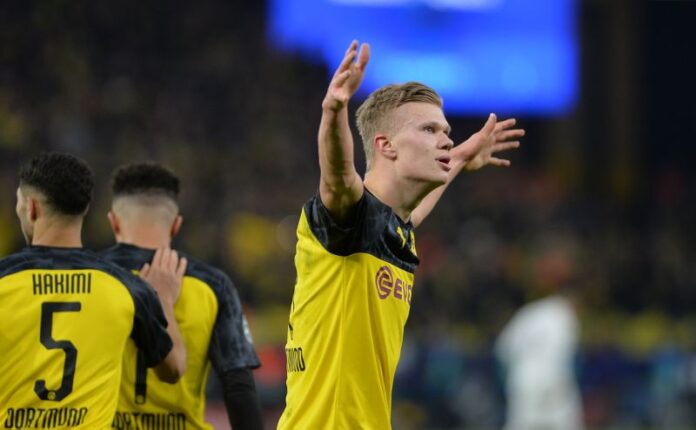 Erling Haaland marked his first Champions League appearance for Borussia Dortmund with a stunning double in a 2-1 win over Paris Saint-Germain in the first leg of their last-16 clash.
Having scored eight goals in the group stage for Red Bull Salzburg before moving to the Bundesliga side in January, Haaland moved level with Robert Lewandowski as the competition’s leading marksman, scoring either side of Neymar’s tap-in to leave the tie nicely poised ahead of the second leg in three weeks’ time.
Lucien Favre unsparingly named the same XI that had started the 4-0 win over Frankfurt at the weekend, but Thomas Tuchel, by contrast, had rotated heavily for PSG’s crazy 4-4 draw with Amiens, and made seven changes to his side, welcoming Neymar back into the fold after a rib injury.
The Brazilian whipped a yard or two wide with an 11th-minute free-kick, but that was to be as close as the visitors got to troubling the Dortmund goal and the hosts dominated the first half.
Jadon Sancho was everywhere, testing Keylor Navas with a low curling effort and generally wreaking havoc on the counter, while the energy of Achraf Hakimi caused all sorts of problems for Presnel Kimpembe and Layvin Kurzawa down the Dortmund right.
Often, it was only a wayward final ball from Dortmund that saved the Parisians.
Marco Veratti and Idrissa Gueye were overrun in the midfield by Axel Witsel and Emre Can, but the German’s choice of pass was poor and he wasted an excellent chance with a heavy touch after Hakimi’s smart cutback.
The interval should have given PSG the chance to liven up, but the second half began with their left-flank being exposed again, first Hakimi and then Sancho getting to the byline, but failing to find a yellow shirt in the middle.
Roman Burki was given his first notable piece of work on 65 minutes when denying Mbappe after a rare flowing move involving Neymar and Angel Di Maria, but soon after, the home side finally found the breakthrough they deserved.
It came in predictable fashion, too, Sancho releasing Hakimi on the overlap down that porous right flank, and though Guerreiro’s effort from his cut-back was blocked, Haaland reacted first to toe into the roof of the net.
Out of nothing, PSG hit back immediately, Mbappe surging through three Dortmund defenders, none of whom made a convincing challenge, and laid on a plate for Neymar to score what may yet prove to be a crucial away goal.
But Dortmund were not done, though, as Haaland produced the latest “wow” moment in a brief career already full of them, lashing a thunderous left-footed strike into the top corner from 20 yards.