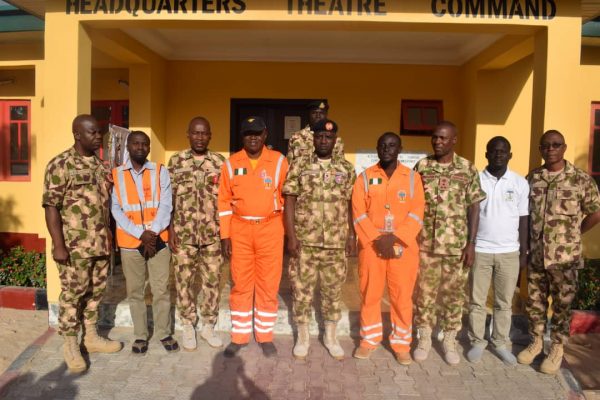 Share
Facebook Twitter LinkedIn Pinterest Email
The Theatre Commander, Operation Lafiya Dole, Major General Benson Akinroluyo, has assured the National Emergency Management Agency of continued cooperation and support in the conduct of emergency and humanitarian operations in the North East theatre.
Akinroluyo gave the assurance on Monday when he received the Zonal Coordinator of NEMA, Bashir Garga, during a courtesy visit to the Headquarters Theatre Command in Maiduguri.
Noting that NEMA is inevitable and very vital in the management of emergency and humanitarian crisis, the Theatre Commander urged the agency not to relent in giving succour to the victims of terrorism and insurgency, as well as Internally Displaced Persons in the North East theatre by catering for their humanitarian needs.
Speaking during the visit, the Zonal Coordinator, who lauded the troops of Operation Lafiya Dole for their sacrifice in the fight against terrorism and insurgency, pledged to sustain the synergy between NEMA and Operation Lafiya Dole in the conduct of its activities.
Garga added that the troops had provided the requisite support enabling the agency to access liberated areas and troubled spots to carry out humanitarian as well as search and rescue operations.
The Theatre Commander and the Zonal Coordinator both expressed desire to explore new areas of cooperation to foster their operations.
'Operation Lafiya Dole' Benson Akinroluyo NEMA north-east
Share. Facebook Twitter Pinterest LinkedIn Tumblr Email