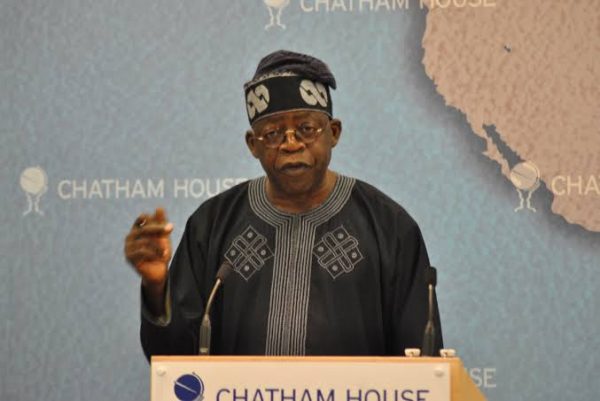 Tinubu travel to the US in 1975, where he studied first at Richard J. Daley College in Chicago, Illinois and then at Chicago State University. He graduated in 1979 with a Bachelor of Science (BSC ) degree in Accounting.

Tinubu worked with some US companies: Arthur Andersen, Deloitte, Haskins & Sells, and GTE Services Corporation, before returning to Nigeria.

After returning to Nigeria in 1983, he joined Mobil Oil Nigeria and later became an executive of the company. He joined politics in 1992 and was elected as Senator representing Lagos West at the National Assembly on the banner of the Social Democratic Party (SDP).

After the late military Head of State, General Sani Abacha, dissolved the Senate in 1993, Tinubu become an activist, campaigning for the return of democracy as a part of the National Democratic Coalition movement. Although he was forced into exile in 1994, Tinubu returned after Abacha’s death in 1998.

Tinubu was elected as the governor of Lagos State in 1999 on the platform of Alliance for Democracy (AD).

During his eight-year in office, he made large investments in education in the state and also initiated new road construction, required to meet the needs of the fast-growing population of the state.

After leaving office in 2007, Tinubu retained his status as one of Nigeria’s most influential politicians and he played a key role in the formation of the All Progressives Congress in 2013.

Tinubu was among the politicians who created the APC as a “mega opposition” party with the merger of Nigeria’s three biggest opposition parties – the Action Congress of Nigeria (ACN), the Congress for Progressive Change (CPC), the All Nigeria Peoples Party (ANPP), a faction of the All Progressives Grand Alliance (APGA) and the new PDP (nPDP), a faction of the then ruling Peoples Democratic Party.

This key role in the formation of the party gave him the title of the APC National Leader.
On June 8, Tinubu won the APC presidential ticket for the 2023 general elections, after scoring 1,271 votes to defeat 13 other aspirants at the Special National Convention of the party in Abuja.