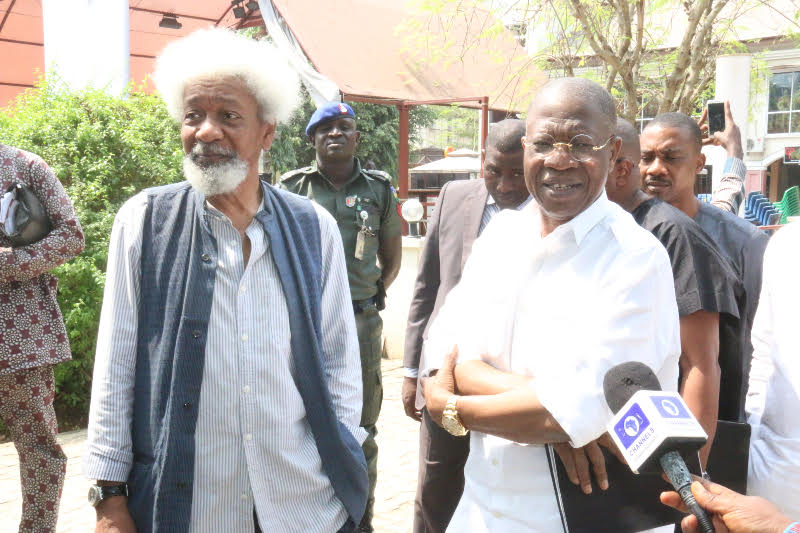 The Minister of Information and Culture, Alhaji Lai Muhammed, has described Prof. Wole Soyinka’s literary ingenuity and contributions to the development of literature and dramatic arts as legendary.
Muhammed said this at the command performance of “Death and the King’s Horseman,’’ one of the iconic plays written by of the Nobel Laureate, staged by the National Troupe in Lagos on Sunday.
The News Agency of Nigeria reports that the event was organised by the ministry to celebrate Soyinka’s 30 years of being made a Nobel Laureate.
He noted that Soyinka had continued to play vital roles in the development of arts, culture and democracy in the country and the world over.
The minister said that the literary icon, “is one of Nigeria’s literary gifts to the world”.
He said: “I want to say that we will continue to count on his support in our quest to develop and promote our country’s creative industry to enhance its contributions to the nation’s economy.
“I recall how this time 30-years ago, Nigeria was inducted into the hall of fame of producers of Nobel Laureates with Professor Soyinka’s winning of the 1986 Nobel Prize in Literature.
“It was such a historic moment for us in the creative industry, as a nation and a continent.
“It was the first time that a Nigerian, an African and indeed a black writer, will be named a recipient of the prestigious Nobel Prize in Literature.”
He said the creative industry and its important components, the performing arts, have been optimally and gainfully harnessed economic wise, by most countries, especially, in Europe, America and Asia.
He said: “Even countries on the African continent like South Africa, Kenya and Egypt have optimally harnessed their creative industry for the same purpose.
“Nigeria has a vast and rich cultural heritage, and if this is strategically re-positioned through increased investment and viable partnerships, it will further drive tourism and significantly lift the Nigerian economy.”
The minister said that their efforts to lift the creative industry had received support from President Muhammadu Buhari.
He said: “Not only has the President rallied support for the sector, he has also directed that such support must reflect in the budget of the Ministry of Information and Culture in 2017.
“We will leverage on such high level support to further our plan to develop our country’s creative industry and also enhance its contributions to national economy.”
The minister said that part of the steps the minister had taken to reap the full potential of the creative industry was to reach out to organisations that have the capacity to help build the industry.
Muhammed said: “Those that can utilise their business knowledge, network and technical expertise to assist the Ministry in the development of this critical sector.
“In this regard, we have only signed partnership agreements with the Tony Elumelu Foundation and the British Council.
“An innovative part of the collaboration is the plan to convene a Creative Economy Task Force that will create a road map for the Creative Industry.
“It will provide a better picture of what is on ground and help form policy development,’’ he said.
Muhammed also used the opportunity to solicit the support of stakeholders in the performing arts toward the successful implementation of this administration’s national reorientation campaign, “Change Begins with Me”.
“It was inaugurated on September 8, 2016. The campaign is aimed at bringing back those time-tested values that once defined us as a people. Within this is our virile performing arts culture.”
The minister, on behalf of the Ministry, saluted Soyinka and wished him longer life so that, “this exemplary Nigerian and global citizen can continue to make us proud.”

Osinbajo lists factors that are fundamental to peace