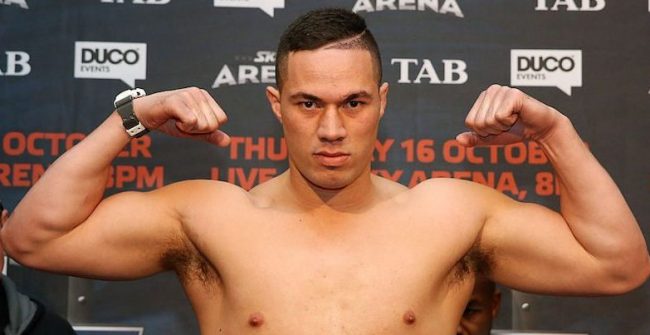 Share
Facebook Twitter LinkedIn Pinterest Email
Joseph Parker has told Anthony Joshua to forget about his Wembley win over Wladimir Klitschko as the WBO champion promises to provide a “sharper and stronger” challenge in Cardiff.
The New Zealander says too much focus was put on Joshua’s victory over the former heavyweight king in the final press conference for Saturday’s fight, live on Sky Sports Box Office, with AJ’s trainer Rob McCracken suggesting that Klitschko was a tougher proposition than Parker.
But the 26-year-old Parker pointed out the physical advantages of being younger than Klitschko, who floored the British star before suffering a late stoppage loss at the national stadium last April.
“He keeps talking about Wladimir Klitschko,” Parker exclusively told Sky Sports.
“Listen, I’m not Wladimir. If he’s focused on Wladimir, then he’s going to get a different fight altogether.
“Wladimir, he ran the division for a long time, he’s a great fighter, and we respect him.
“But he was a little older and I feel like I’m younger and sharper, and stronger.
“But we’ll find out on Saturday.”
WBA “super” and IBF champion Joshua insisted the smart money should be put on him to defeat Parker by knockout, but the Kiwi had a simple message to anyone who is betting on the fight.
Parker said: “Bet on him? Bet on me, and make some money.”
Joseph Parker Rob McCracken Sky Sports Box Office WBO Wladimir Klitschko
Share. Facebook Twitter Pinterest LinkedIn Tumblr Email