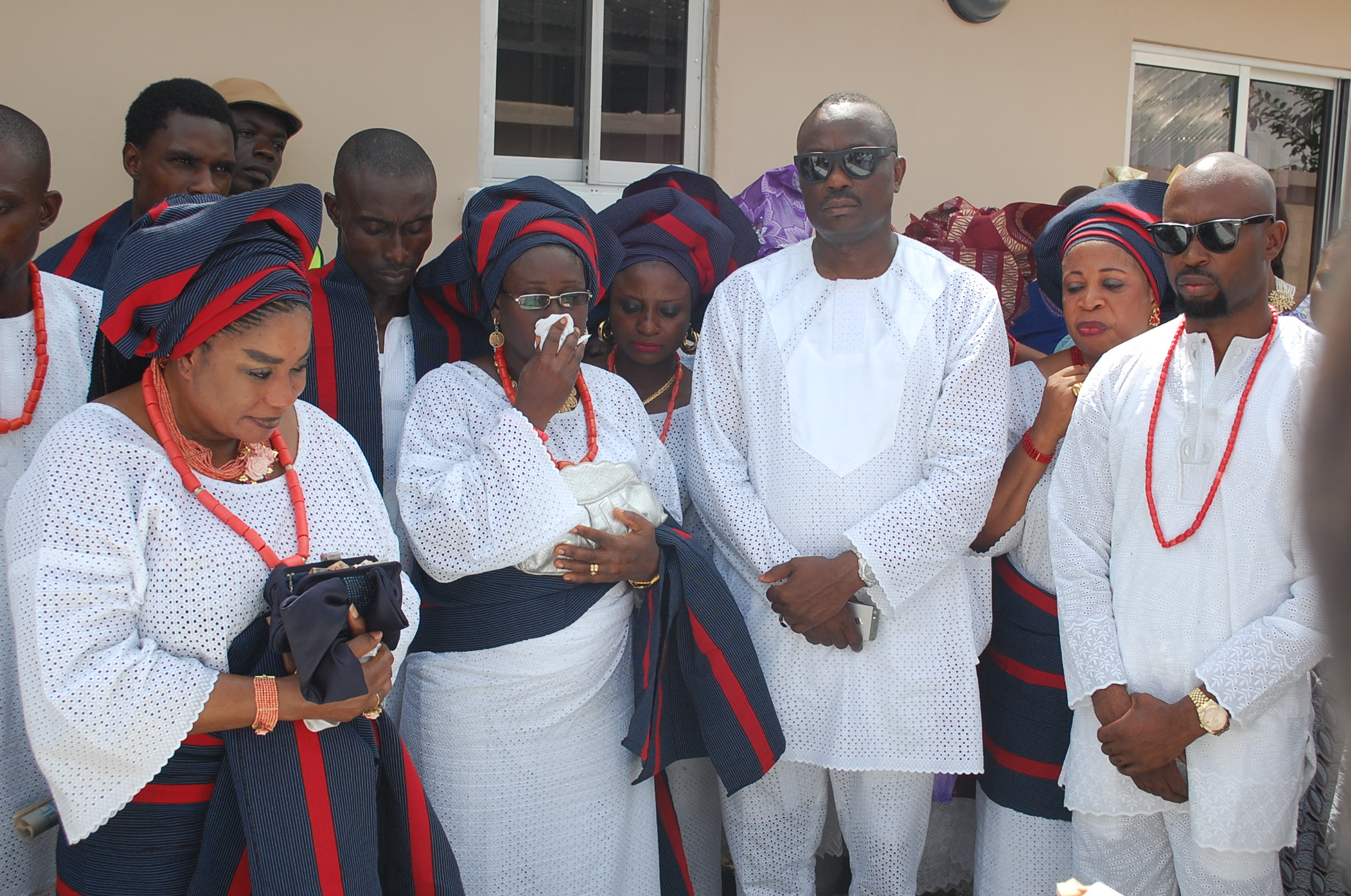 The remains of Pa Richard Olafehinti Akingboye, the Bobagunwa of Erinje and father of Otunba Bamidele Akingboye, a senatorial aspirant of the Peoples Democratic Party for Ondo South Senatorial District, has been laid to rest.
The high octane funeral service, a week-long programme, which had started on October 28, 2014 at his Olodi-Apapa, Lagos State home, peaked on Friday with a church service which at The Apostolic Faith Church, Kalejaye Street, Okitipupa and an A-class reception at Ogundugbuja High School, Okitipupa.
The corpse was heralded into Okitipupa township on Thursday afternoon in a convoy led by Lagos-based popular funeral parlour and casket making company, Ebony casket.
The Akingboye extended family danced round Okitipupa town in a grand show of Baba Olafehinti Akingboye’s final return to his Ikale root.
They had a stop-over at his Halubi family house for a brief lying-in-state, after which Baba Akingboye’s remains were taken to the Jimba Street house of his son and the scion of the Akingboye family, Otunba Bamidele Akingboye.
A Christian wake keep and service of songs took place on Thursday evening, anchored by Baba’s home church, The Apostolic Faith.
The funeral service on Friday attracted dignitaries from all walks of life to The Apostolic Faith church auditorium at Okitipupa, as the church was filled to capacity.
The church choir and Apostolic Faith music unit rent the air with classics and spiritual rendition that reminded the heart of the praise worship that shall herald the saints of the Lord to the hereafter.
In the funeral sermon, Revd. Richard Aro called on all Christians to watch their everyday activity and to always remember that we are all but sojourners in this fleeting world.
Aro reminded the congregation of the fact that no matter how long we stay on this planet, someday we shall all be translated to the world beyond.
He encouraged Christians to live everyday like it would be their last, given the fact that no one knows when he or she shall be called to the heavens, where our final domicile is determined by our life on earth.
While quoting copiously from the scripture, Revd. Aro admonished the congregation to strive to live the Christian life, stressing that life after death is real.
He congratulated the family of Akingboye, whose father was a committed member of the church and a good community Christian leader.
The man of God encouraged the children of the deceased to emulate their father in church service.
The grave side rite of committal was not without the obvious show of sentiments by wailing and tears.
But then there was a sense of fulfilment at the fact that the children survived their patriarch.
The reception and high society party in honour of Baba’s memory, which took place at Ogundugbuja High School, would be a talk of the town for a very long time.
The creme-de-la-creme of the society, politicians across party lines, expatriates and wheeler-dealers in the world of business were all on ground to celebrate with one of their own, Otunba Bamidele Akingboye.
The community people of Okitipupa and Ikale as a whole also thronged the party in a show of support for Otunba Bamidele Akingboye, who is seen in different quarters as a man of the people.
Interestingly, there was no political party sentiments as politicians across party lines hugged and exchanged banters.
Popular gospel-juju highlife crooner, Yinka Ayefele, was on ground with his ‘no-dull moment’ brand of music, with which he serenaded the atmosphere, adding rhyme, colour and thrills to the occasion.
Otunba Bamidele Akingboye has this to say of his father: “My father was a disciplinarian who always told us his children to protect the name Akingboye wherever we go.
“My father touched many lives during his lifetime and left behind a legacy he implored us to build on.
“I will miss my father because he was and still my priceless jewel.
“My daddy was my adviser, mentor, role model and a unique man who will do anything to make children and anyone that passed through him happy.”