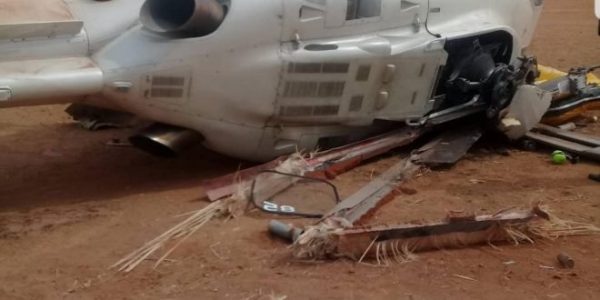 The Presidential Candidate of Accord Party, Rev. Isaac Babatunde Ositelu, has called for thorough investigations into the immediate and remote causes of the crash of the helicopter conveying Vice President Yemi Osinbajo to Kabba, Kogi State on Saturday.
While congratulating Vice President Osinbajo and his team as well as the crew of the crashed chopper for escaping unscathed, Osintelu said the circumstances surrounding the crash of the aircraft must be probed and outcome made public in order to ensure that there is no repeat of such accident.
Ositelu also said the circumstances that led to the use of a hired helicopter must be explained to Nigerian tax payers since it is in the public knowledge that the country has a number of aeroplanes made up of jets and helicopters in the presidential fleet being managed by the Nigerian Air Force.
According to him, it is imperative to come public with such explanation because of the subdued rumour that a certain cabal might have made it difficult for the Vice President to have unmitigated access to the use of the aircrafts in the presidential fleet.
The Accord Party Presidential Candidate also expressed worries on the chaotic scenario at the site of the crash site.
According to him, the rowdy and uncoordinated approach to the rescue effort was bereft of professionalism that should have been accorded the office of the number two man in the country.
Ositelu said that from the video of the crash trending online, it was obvious that first responders were absent to give immediate succour to the victims of the crashed chopper.
Specifically, he noted that there were no fire fighter, ambulances and health workers among others to support the rescue efforts.
Ositelu said the video of the crashed site only depicted a motley crowd running riot, while some others were just shouting, screaming and others simply using their mobile phone to record the disaster.
Besides, he said the area of the crash was not immediately cordoned off to avoid unmitigated disaster.
He said too many people rushed to the scene and in such a situation of uncertainty, a third force could have inflicted harm on the Vice President in the flurry of uncontrolled access to the crash scene.
Ositelu said though the Vice President immediately came out of the accident and demonstrated uncommon boldness by continuing with his mission to the town, he advised that it is important for the Osinbajo, his team and the crew to undergo medical tests to ensure that there are no undetected internal injuries as a result of the impact of the chopper crash.
By all means, he said that the Nigerian Air Force must tell the Nigerian public if its professional advice was sought before the number two man in Nigeria was put in that crashed aircraft.
Besides, he said that the NAF must also explain the state of health of the crashed chopper if it gave a bill of clean health before the ill-fated flight.
Ositelu urged the Air Accident Investigation Bureau to ensure a thorough professional review of the accident to ensure that the needful is done to forestall future re-occurrence.