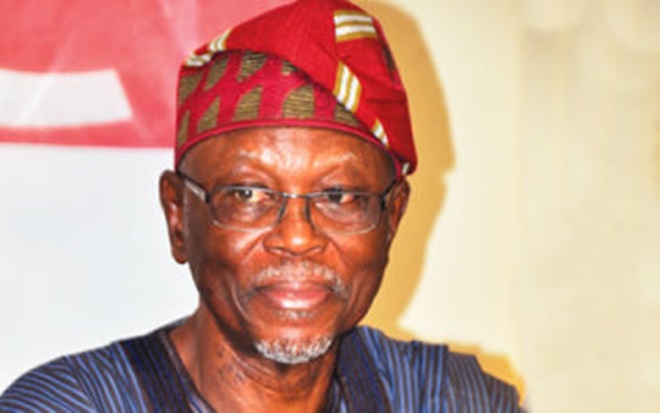 Vice President Yemi Osinbajo and National Chairman, All Progressives Congress, Adams Oshiomhole, on Saturday in Abuja attended the 80th birthday celebration of former APC National Chairman, Chief John Odigie-Oyegun.
The Secretary to the Government of the Federation, Boss Mustapha, represented President Muhammadu Buhari, while Prof. Ibrahim Gambari, former Nigeria’s Permanent Representative to the UN, was the Guest Speaker.
Governors Godwin Obaseki of Edo State, Kayode Fayemi of Ekiti State, Atiku Bagudu of Kebbi State, Simon Lalong of Plateau State, Abdullahi Ganduje of Kano State and Mohammed Badaru of Jigawa State also attended the event.
Odigie-Oyegun was born August 12, 1939.
Some former governors who served same period when Odigie-Oyegun was the Governor of Edo State were also present.
In his remark, Osinbajo, who was the Special Guest of Honour, said he had always admired Odigie-Oyegun for two reasons.
He said: “First is that somehow he has always been his own man, charting his own course, sometimes making some real trouble as for example when as a Federal Permanent secretary he risked contempt proceedings when he refused to testify on principle.
“But almost always you find him on the right side of history.
“As a founding member of Alliance for Democracy, member of National Democratic Coalition and founding member of the APC and its first Chairman, one who led the party to its historic victory to unseat the ruling party.
“But the second reason for my admiration is that somehow he manages to be so deep in the politics of Nigeria yet he doesn’t ever look like a politician.
“He sounds always like a fine, well-bred, well spoken gentleman dragged into politics, but indeed he is a consummate politician and an astute strategist.”
Osinbajo said people like Odigie-Oyegun had shown that politicians could be loyal faithful men and women.
Gambari, who was the Guest Speaker, said Nigeria was at a time in its history where the forces of unity and those of fragmentation were in very stiff competition.
He said it was clear to him which force should emerge victorious, adding that concerted efforts were required to salvage Nigeria from negative forces.
Gambari said that collective efforts and dedication were required for Nigeria to stand taller in the comity of nations
In his remark, Fayemi, who is the Chairman of Nigeria Governors’ Forum, described Odigie-Oyegun as a quintessential public servant, a committed and patriotic Nigerian.
In his response, Odigie-Oyegun said that at 80, he was grateful to God for being nice to him as he had achieved most things he set out to achieve.
He said it was high time Nigeria’s potentialities were converted to realities.
According to him, Nigeria needs political commitment, political will and political courage to make the changes that are necessary to put the nation where it ought to be.
Odigie-Oyegun said merit should be given preeminence in appointments as qualified people were spread all over Nigeria.
He said: “Fortunately today, I doubt if there is any corner of Nigeria where there are not highly qualified Nigerians and the time has come for merit to become the sole determinant of positioning and placing people.”
He also called for the adoption of the carrot and stick approach, adding that while bad and corrupt people were being punished, service to the nation should be rewarded.
The high point of the event was the cutting of birthday cake.